Update 6-27-22:
Since publishing this story, a Steam Deck designer at Valve posted a warning on Twitter to avoid this mod because it will heat up the charger IC and "will significantly shorten the life" of the console.
Original Story:

It's not every day a portable handheld manufacturer encourages you to do your repairs and upgrades yourself. Well, to be fair, basically they still don't. That said, Valve has had no qualms about sharing how to take apart and put back together its Steam Deck. Not without plenty of warning that you could damage the hardware, though.

Well, following in the footsteps of modders before them, Twitter user @TheSmcelrea has decided to modify their Steam Deck to allow for the installation of an M.2 2242 SSD. That's great news, because the 2230, which is what comes with a Steam Deck's standard config are not that common compared to its larger brethren. Because of the lower public market demand for this scale sometimes ends up with a higher price compared to its 2242 brethren. Not only that, this particualr drive has faster read and write speeds than the one included, the modder recorded write speeds of 406 MB/s during the installation of SteamOS, which is pretty quick for a handheld.

The pcb appears to work fairly well for adapting a 2242 m2 to the steam deck, it doesn't collide with anything on the motherboard or put any extra strain on any cables. However, it does make the heat spreader bow a tiny bit. The back plate reassembled without issue. pic.twitter.com/4j4LVbS0NG

So how do you do this mod? It's actually not all that much. According to the series of Tweets from the modder it was basically just shifting around the organization of cables and thermal pads on the interior of the case and voila, room for a larger SSD! The only possible concern is that the heat spreader bows a little bit, but the back place reassembled and it was put back together with little to no issues. These simple shifts don't even add any extra strain on the cables that get moved around either, so the Steam Deck, from the factory, is more than capable of having this modification done to it. 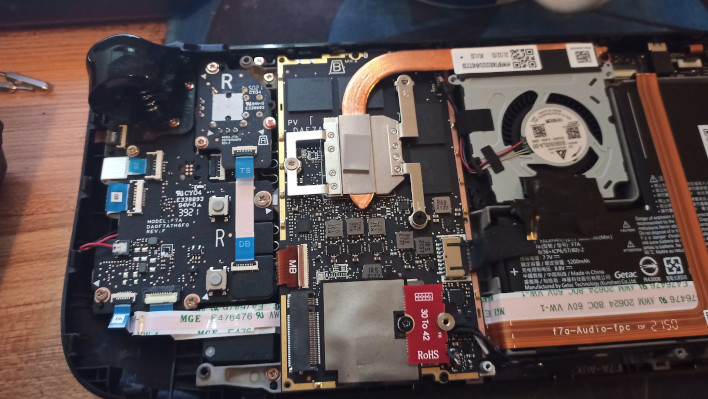 The drive that the modder put into the steam deck was actually just a simple KingSpec PCI-e 512 GB 1100/1000 MB/s 512 GB single sided SSD. That means that basically just about any SSD with similar specifications should work perfectly fine for the Steam Deck. Additionally because you can just download SteamOS directly from the Steam web site, you can start with an empty drive and install fresh. You don't even need to clone your existing drive, though it might make things a little easier.