Steam Deck Consoles Will Be Given Away Each Minute Of The Game Awards, How To Enter

You know, your author here would really like to have a Steam Deck. The thing is, he just can't justify the purchase. If you're in the same boat, don't miss your chance to pick up a free Steam Deck in Valve's Game Awards giveaway on December 8th. Every single minute, Valve will pick one live viewer of The Game Awards, and that person gets a free Steam Deck.


It's exactly what it sounds like: the company is giving away hundreds of Steam Decks, completely free, during the entirety of Geoff Keighley's The Game Awards. There are plenty of catches, of course, but none so onerous as you might expect, at least for your general PC gamer in eligible regions (like, probably, most of you reading this).
The giveaway is available to folks in the US, Canada, UK, and certain European countries. You need to have a Steam account in good standing—no VAC bans or community troubles—and you need to have purchased something on Steam between November 14th '21 and November 14th this year—hope you snagged something in the Autumn sale! Then, go to this page, sign in to your Steam account if you aren't already, and click the blue "Register me" button at the bottom.


Once that's done, just make sure to watch The Game Awards on Valve's streaming site, Steam.tv. There's an option on the page above to set a reminder on your Steam account, which can come via e-mail or via the service's mobile application. Make sure you have the Steam app, not just the new Steam Chat app, which is separate! You can also add reminders to Apple, Google or Office calendar services. 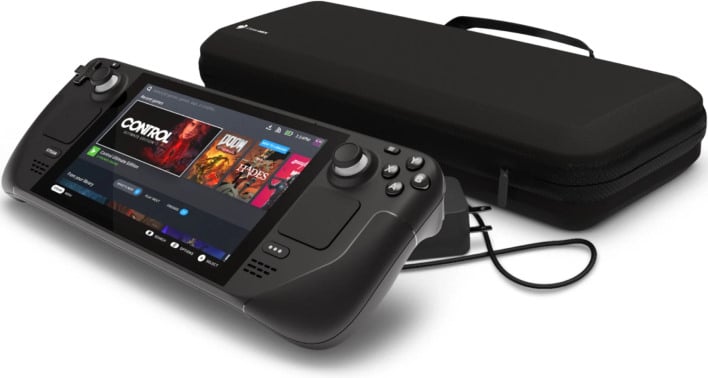 Surprisingly, while you might reasonably expect freely-given Steam Decks to be the low-cost 64GB version, that's not the case. Valve are in fact giving away the top-tier 512GB version of the Steam Deck to each lucky winner. That model comes with a scratch-resistant glass screen and a number of extras, including a fancier carrying case, a branded cleaning cloth, and a mesh pouch—to say nothing of the 512GB of high-speed NVMe storage inside.

If you can't or don't want to watch The Game Awards, you can also enter by snail mail for a separate drawing, which is why we said "hundreds" earlier. The instructions for how to do that are on Steam's rule page for the contest.