The Steam Deck is hot right now. Valve's new handheld has captured the attention of many media outlets and people, rapidly becoming a preferred way of playing PC games on the go. When we say hot, we aren't only referring to media and consumer response, though. We're also talking about it getting quite warm to the detriment of performance in some cases. Owners are in luck, though, as a new product from Unitek might just be an answer to those problems.

Even though the original Steam Deck Dock from Valve had manufacturing and shipping woes which delayed its release, third parties have found the opportunity to capitalize and have released a number of their own docks. One particular company, Unitek, has decided to do something about the device getting quite toasty during some of those intense gaming sessions. 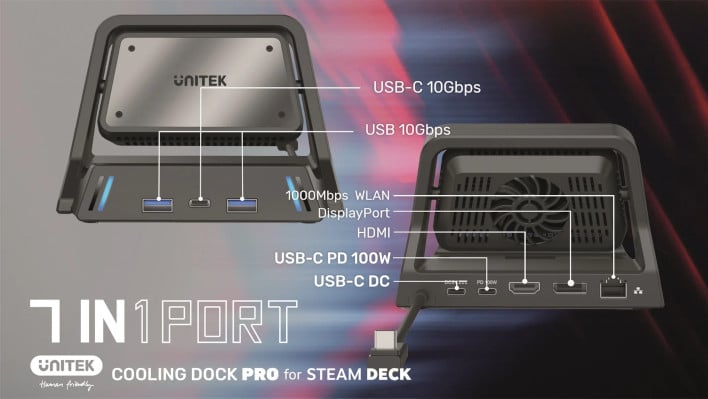 We know the Steam Deck gets pretty warm on the back plate, so this charging dock, the Cooling Dock Pro, also includes a heatsink and a fan. It is not particularly portable if you did intend to take your Steam Deck on the go, but definitely a good option if you intend to be sitting at your desk. The claim from the manufacturer is that the Steam Deck can be cooled down by 20 degrees Celsius within 5 minutes once you drop your device in the dock.

Whether that 20 degree claim is true has yet to be confirmed, however, what is hard to deny is that this particular dock holds reasonable functionality. Though it only sports two USB Type-A ports, it does include an additional Type-C port on the front, all with 10Gbps transfer. The back the device has a USB-C cable for connecting your Steam Deck, two USB-C power ports, an HDMI Port, DisplayPort, and a 1000Mbps WLAN port. You will also see a grill with a fan in it. This fan is also RGB, so you can see that glow on the wall behind your Steam Deck, we guess. 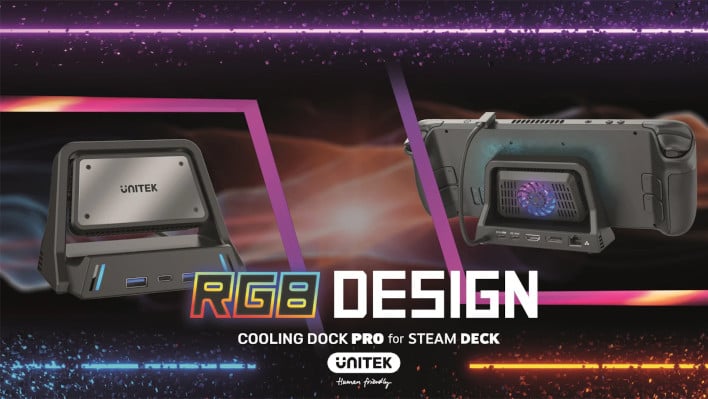 The first batch is intended to ship at the end of Quarter 4 this year, and the product will run you about $119. That's $30 more than Valve's dock option, but Valve's doesn't have front-side USB, USB-C data, or a cool glowing fan does it?