For people who were among the first to preorder Valve's Steam Deck console, they are going to have a joyous holiday season, especially if a batch of early benchmarks are any indication. The handheld gaming PC releases in December, at which point reliable performance metrics will arrive as well. As we wait, a user who obtained a Steam Deck development has been putting it through its paces.
Bear in mind that the development kit might not paint a full picture of performance and capabilities of the actual retail units that will ship out in a few months. The core hardware is set in stone, but software optimizations and other tweaks can affect what the user experience will end up being, as with any hardware platform.
Those specs, by the way, consist of a custom AMD system-on-chip (SoC) with a 4-core/8-thread Zen 2 processor clocked at 2.4GHZ to 3.5GHz, and a RDNA 2 GPU with eight compute units, clocked at 1GHz to 1.6GHz.
The Steam Deck also features 16GB of LPDDR5-5500 memory, and three different storage options: 64GB eMMC (PCIe Gen 2 x1), 256GB NVMe SSD (PCIe Gen 3 x4), and 512GB "high speed" NVMe SSD (PCie Gen 3 x4). All of this hardware goodness powers a 7-inch display with a 1280x800 resolution and 60Hz refresh rate in handheld mode (it also supports 4K/120Hz and 8K/60Hz when docked).

Can we realistically expect the Steam Deck to deliver a consistent 30 frames per second in handheld mode, or higher, though? A user in China obtained some encouraging Steam Deck benchmarks in a variety of games, at serviceable visual quality settings. It varies by title, but in Shadow of the Tomb Raider, the user recorded 30 fps at the Highest setting, 36 fps at the High setting, and 60 fps with Custom settings.
"I can't feel the stutter at all when using the highest image quality to play [Shadow of the Tomb Raider]," the user stated (via Google Translate). "The average frame number performance of more than 30 frames in the highest quality can already make me very satisfied. The quality of light and shadow in the game can also be very good."
Obviously there are some nuances in the statement that Google Translate doesn't accurate decode, but we get the gist of what he's saying. The Steam Deck delivers a smooth and stutter-free experience in Shadow of the Tomb Raider. 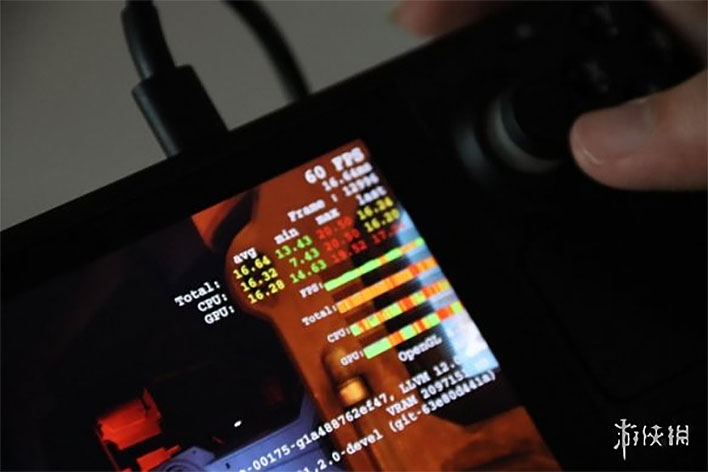 Same goes for Doom Eternal, where the user reports averaging 60 fps at the Medium quality preset, and 46 fps when increasing the visual fidelity by tweaking the Custom fields.
Here's a breakdown...
Cyberpunk 2077 proved the most challenging, as it is a demanding game that can make a full-fledged desktop PC break a sweat. There were some performance hiccups at the High setting. After adjusting the picture quality to Medium and Low, however, the user said the game plays "very smoothly."
While testing and benchmarking the Steam Deck development kit, the user took some temperature measurements with an infrared thermometer. They saw temps hit 42.6C at the back, and around 29C at the grips. And regarding battery life, three hours of gaming dropped the battery level from 100 percent to 46 percent—not too shabby, especially considering that is an area that will improve by the time retail units begin shipping.
Overall, this is all very encouraging. The Steam Deck is looking like a capable handheld PC console in the early going, and should only improve with time.
Valve continues to accept Steam Deck reservations ($5 down), with units costing $399 for 64GB, $529 for 256GB, and $649 for 512GB. All three are now expected to ship sometime "after Q2 2022" for orders placed now.