It has been somewhat of a wild week for Steam. A week ago Sunday, Valve's digital distribution platform broke a concurrent user record that had stood for over two years, with 18,801,944 users. The previous record was 18.5 million users. Then this past Sunday, Steam saw 19,107,803 people hop onto the service, setting the record for the second time in a week.
The new record came at 14:10 GMT. Out of those users, just over 6 million people were playing in a game, as opposed to simply being signed into the service. That's a lot of gamers, and it raises the question, why is Steam suddenly setting concurrent user records? 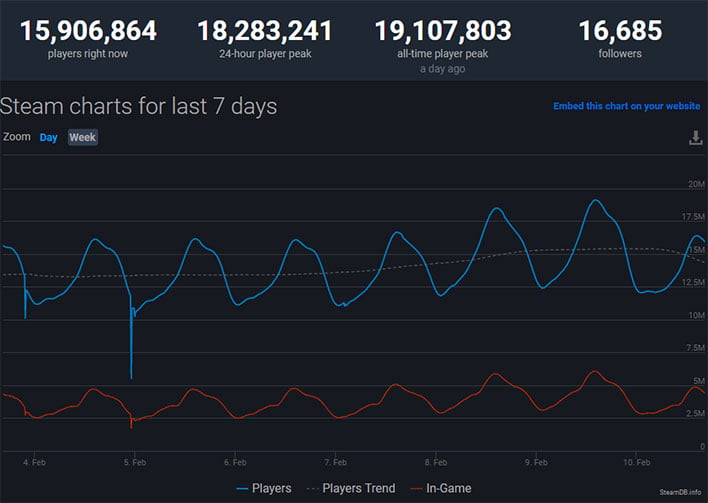 Part of the reason is players flocking to Counter-Strike: Global Offensive. It set an all-time player peak of 901,681 users last week, and hit 839,604 users yesterday. The former is nearly 50,000 more users than the game's previous player peak, set back in August 2012 (not long after the game launched).
It seems odd for a 7.5-year-old game to drive record numbers, both within the game itself and in contributing to record numbers for the most popular gaming digital distribution platform in the world. However, Valve made CS:GO a free-to-play title towards the end of 2018, and then added new maps and features a few months ago via Operation Shattered Web.

In addition to CS:GO's record numbers, there is a theory that the Coronavirus outbreak is playing a role in Steam's high concurrent user counts.
"This happened on the last day of the Lunar New Year holiday for most places in China. Novel Coronavirus fears, city lockdowns, and travel restrictions has kept people at home and one activity to pass the time is gaming. Peak in January was on the 26th, one day after New Year," Daniel Ahmad, senior analyst at Niko Partners, posted on Twitter last week.

China is home to around 40 million Steam users. While more research is needed to say for sure, the theory is at least plausible. We'll see how things go in the coming weeks as factories and stores in China open back up.