Spotify and Roblox have teamed up to build an island in the metaverse where you can hang out with all your friends and listen to some tunes. This collaboration makes Spotify the first music streaming brand to have a presence on Roblox with the creation of Spotify Island.

Roblox and Spotify have created large fan bases on their own, and now the two are joining forces to create a place for all those fans to hang out with one another and collaborate in the metaverse, as well as mingle with artists in the near future. Spotify Island is being billed as an interactive world where fans can link up and create new sounds together, hang out in a digital space, and also gain access to exclusive virtual merchandise.

While on the island you will be able to enjoy an immersive audio experience by creating music and exploring sounds at the Soundtrap-powered virtual beat-maker stations. If you are up for exploring the island in more detail, you may even find a few Easter eggs hidden along the way. 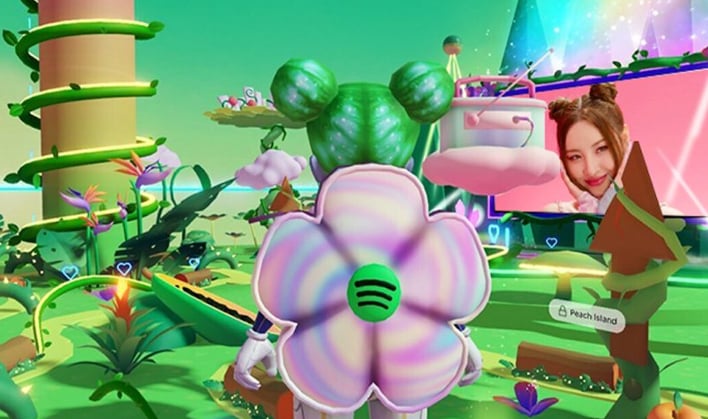 The island is created in a way that allows users to interact with the Spotify brand in a whole new way, such as collecting the heart-shaped "Like" icon, which can be exchanged for virtual merch. While on the main island, gamers will be able to portal to other themed islands that will change throughout the year. Each island will have exclusive content, artist interactions, and themed mini-quests.

Spotify says that this is just the beginning of what users can expect when it comes to ways users can experience Spotify Island on Roblox. Those who join in now will be privy to the first themed experience on the island, K-Park, an homage to all things K-Pop. Later this spring, K-Park will be giving fans a chance to interact with superstars Stray Kids and SUNMI.

The music platform says that a portion of the sales will go directly to the artists, but no percentage has been given as of yet. It says it will be working with artists in order to create more opportunities in the coming months.