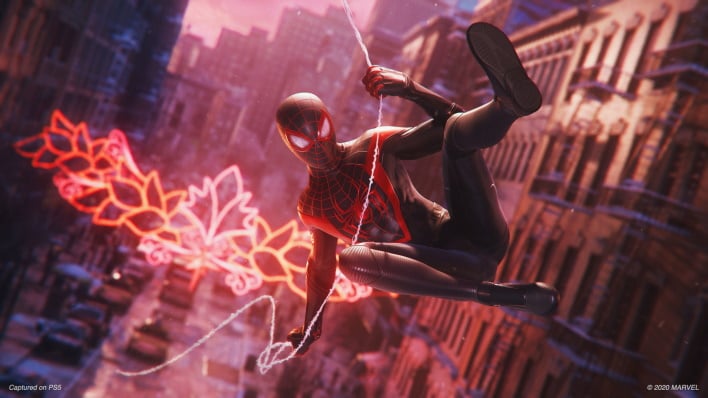 If you wanted to experience Spider-Man: Miles Morales in ray-traced glory on the PlayStation 5, you would have had to trade off performance and drop the game down to 30FPS in “Fidelity Mode.” Running at 60FPS, or “Performance Mode” netted decent frames but dropped the ray tracing. Now, there is a compromise between the two settings with “Performance RT” mode so you can play the game at 60FPS and still enjoy ray tracing on the PS5.

Overnight, Insomniac Games, the developers behind Spider-Man: Miles Morales, pushed a 261.9MB update to consoles that brought the “Performance RT” mode. This system hits 60FPS with ray tracing enabled by “adjusting scene resolution, reflection quality, and pedestrian density.” It is rumored that it drops the resolution down to 1080p overall, but it should not matter much as the game will still look good.

In the replies to the tweet Insomniac sent out, people are quite excited about the update. Although there have been rumblings about the update causing issues, it is not stopping people from replaying the Spider-Man game. In fact, Spider-Man: Miles Morales *thwapped* it’s way to the top of the PS5 downloads chart in November, and it may sit there next month with this new update.

Ray tracing in any game is always a welcome feature, as long as the performance is acceptable. Insomniac Games seems to have nailed it, and Spider-Man: Miles Morales could be the prettiest game on PS5 right now. If you have gotten to play the game and have experienced the “Performance RT” mode, let us know what you think of it in the comments below.