As smartphone makers are apt to do, Sony is hanging its hat on camera performance with regards to its latest flagship smartphone, the Xperia 1 II ("Mark two"). The phone also touts high-end specifications and 5G connectivity. Sony's boldest decision, however, was giving it a $1,199 price tag, a decision it might be back peddling on.
That is where pre-order pricing landed, anyway, though any references to a price are now gone from Sony's own product page and the retail listing on B&H Photo. Is this indicative of Sony perhaps having second thoughts and mulling a lower introductory price? Sony is not saying anything, so we will have to wait and see.
The phone itself is what you would expect from a flagship handset. It sports a big 6.5-inch OLED display with a 3840x1644 resolution and HDR support, protected with Corning Gorilla Glass 6. This is powered by a Qualcomm Snapdragon 865 processor and 8GB of RAM. For storage, it offers 256GB out of the gate, which is expandable with up to a 1TB microSD card. A 4,000 mAh battery rounds things out. 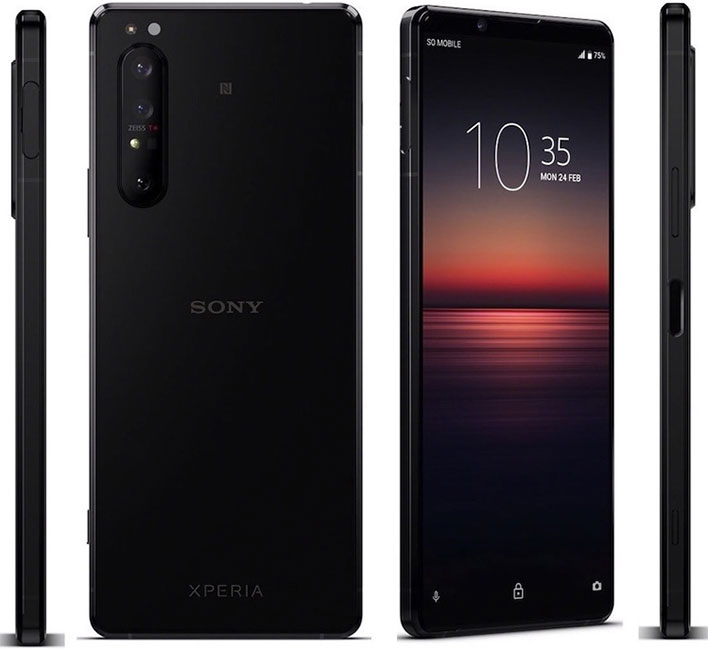 It is the camera performance configuration that Sony seems most proud of here. On the front, there is an 8-megapixel shooter with an 84-degree field of view, f/2.0 aperture, and HDR support. And on there, Sony went with a triple camera arrangement...

Sony says the Xperia 1 II is using calibrated Zeiss optics with a special Zeiss T coating to reduce reflections for "exquisite rendering and contrast." According to Sony, the phone is particularly adept at sports photography and other high-speed captures.
"Utilizing technology developed for Alpha interchangeable lens cameras, Xperia 1 II offers continuous AF that performs AF / AE calculations at 60 times per second. This enables the world's first AF / AE continuous tracking for high-speed shooting at a maximum of 20 fps which is especially useful for shooting moving subjects such as children or animals and fast-moving sports," Sony says.
Sony has plenty more to say on its triple camera arrangement, but to the point, it is supposedly the bees-knees, with a price that stings.
Pre-orders are set to resume in the US on July 1, with the phone shipping to customers and landing at retail on July 24. In addition, preorders placed before June 28 will get a free set of WF-1000XM3 noise-cancelling earphones. It is a really nice bonus—they're a good set of earbuds, and pricey at $199 if purchased separately.