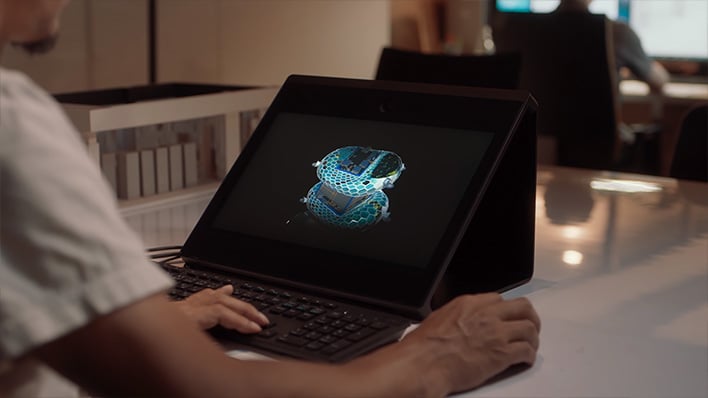 Remember when glass-free 3D felt like the endgame scenario for consumer displays and electronics? Efforts were made to go in that direction, like the legendary Nintendo 3DS, but it never quite took hold. It did not completely die, either. Proof that it did not resides in Sony's new Spatial Reality Display aimed at creators and 3D designers.
Sony calls the Spatial Reality Display a "groundbreaking new product," and it was initially shown off at the Consumer Electronics Show (CES) earlier this year. Using the company's Eye-Sensing Light Field Display (EFLD) technology, it is able to present a glass-free, high-resolution 3D modeling and visualization experience.
"We're excited to bring the world's best technology to bear, moving the design and creation industry forward, particularly as the shift to digital has become so pronounced," stated Mike Fasulo, president and chief operating officer of Sony Electronics North America. "This technology drives new versatility, allowing us to advance an entirely new medium and experience for designers and creators everywhere."

This is not a consumer product by any stretch—the 15.6-inch display alone costs $5,000, and it also requires a powerful PC equipped with an NVIDIA GeForce RTX 2070 Super or higher GPU and Intel Core i7 CPU to make the magic happen. Factory in the cost of a high-end PC and you are looking at a pretty big investment.
The display is capable of a 4K resolution (3840x2160). Other specs include a 500 nits brightness rating, 1,400:1 contrast ratio, 6,500K color temperature, HDMI (input) and USB 3.1 Gen1 Type-C (control terminal) connectivity, and three built-in speakers (1.5W + 1.5W + 2.5W). Sony also says the display offers 100 percent coverage of the Adobe RGB color gamut.
Fine specs, though the real selling point is its ability to generate 3D optical experiences. There are several technologies at play, one of which is a high-speed vision sensor. This follows the precise position of your eyeballs in space on vertical, horizontal, and depth axes at the same time, and tracks eye movements "down the millisecond," Sony says.
There is also a real-time rendering algorithm to display stereoscopic images in real-time, and a micro-optical lens strategically positioned over the display to divide the image into the left and right eyes, negating the need for 3D glasses.
This is one one of those things we would have to see for ourselves to truly determine how well it does (or doesn't) work. And it will be interesting to see what the reviews have to say, once this launches next month. In the meantime, you check out the Spatial Reality Display's product page for more information, and to be notified when it launches.