Game Over: Sony PlayStation And Nintendo Shut Down Sales In Russia

As sanctions continue to take a toll on the Russian economy, companies such as PlayStation and Nintendo joined by stopping product sales in the country. Game development companies, such as Behavior Interactive, have also announced the suspension of sales of games in Russia.

The situation between Russia and Ukraine has brought about a bevy of sanctions against Russia and its government officials in the last couple of weeks. It has led to Russian Oligarchs trying to hide their million dollar yachts in an attempt to avoid them from being seized. As the conflict continues, more and more companies are expressing their concern and hopes for a peaceful resolution. As they express their hope, however, many are also stopping sales in Russia.

PlayStation issued a statement on Twitter yesterday calling for peace in Ukraine. It also stated that it would be suspending all software and hardware shipments to Russia, as well as ceasing operations of the PlayStation Store in the country. Along with stopping sales, the company announced it would be donating $2 million to the United Nations High Commissioner for Refugees (UNHCCR) and the international NGO, Save the Children, to support the victims of the war. 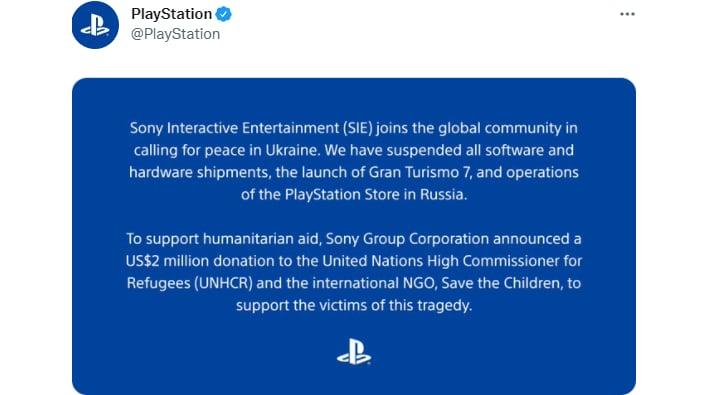 Also on Wednesday, Nintendo announced it was suspending all shipments to Russia "for the foreseeable future". It cited the continued volatility that surrounds the logistics and shipping and distribution of physical goods, as the reason behind its decision. Nintendo also announced it would be postponing the release of Advance Wars 1+2: Re-Boot Camp, a military-themed strategy game, "in light of recent world events."

Behavior Interactive, game development company behind the popular Dead by Daylight game, also announced yesterday that it was suspending sales of its games as well as in-game purchases in Russia and Belarus. It expressed its regret that players in the two countries would be affected by the decision, but said it felt it necessary to "galvanize the global community to oppose the devastation inflicted by this cruel invasion".

The companies yesterday joined a growing list of companies who have stopped sales in Russia. McDonald's, Coca-Cola, PepsiCo, and Starbucks had already suspended operations in Russia. Other game development companies, such as CD Projekt and Electronic Arts, have also blocked sales in Russia and Belarus.

While Microsoft said on Friday of last week that it would stop all new sales of its products and services in Russia, it is Sony that is thought to take the bigger blow when it comes to console makers. The company has the biggest presence in Russia of any console maker, according to industry insiders.

In a statement to CNBC, Lewis Ward, Head of Gaming at research firm IDC, stated, "PlayStation has the largest installed base, so if a company on the console side has a particularly hard choice from a purely financial angle, it's Sony."

Regardless of finances, companies seem to be joining the fight in urging for a peaceful resolution between Russia and Ukraine. Until then, there will likely be more companies stopping sales and shipments to Russia in the days to come.