Microsoft versus Sony, Xbox Series X versus PlayStation 5. We’re sure to see plenty of back and forth both from the manufacturers of these next-generation consoles and from the gamers that will be getting them in their hands over the next few weeks (and months). Today, however, Microsoft is poking fun at Sony over its massive PlayStation 5 and the steps that are required to situate it horizontally or vertically.

Sony showed off the process today in a teardown video that it posted for the PlayStation 5 (skip to the 1-minute mark). In it, we see a somewhat involved process with a single screw and a plastic baseplate that is needed to put the console in either its vertical or horizontal orientation. To place the console horizontally, the stand has to be clipped to the back of the console in its own designated spot, after which the PS5 rests on it.

To situate the PS5 vertically, you have to remove a plastic plug, uncover a compartment on the stand, and screw it into the bottom of the console. It's likely something that most gamers will only do once (or perhaps twice), but Microsoft couldn't help but mock the process. In the tweet below, Xbox UK simply states "How to switch the Xbox Series X from vertical to horizontal" and posted two images: 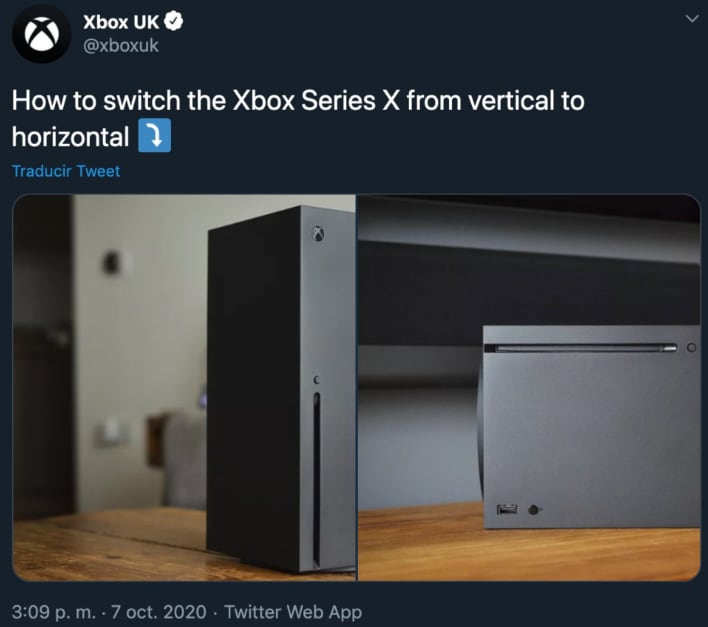 The process is as simple as just laying the console on its side: no stands, no tools, no fuss. It's a petty and funny tweet, which shows that Microsoft's Xbox marketing team at least has a sense of humor.

Sony no doubt had to use this intricate base due not only to the organic shape of the PlayStation 5 which probably wouldn’t allow it to sit level (horizontally), but also because of its considerable weight and size. Using a screw-in base when it is oriented vertically was probably the best way to ensure that it provided a stable platform for the tall machine.