Solidigm is planning to take solid state drive storage capacities to new levels, with a roadmap shared at the Tech Field Day 2022 event highlighting 30.72TB and 61.44TB solutions as being on the horizon. Both drives will employ the company's 4th generation 192-layer quad-level cell (QLC) NAND flash memory chips. The caveat is that neither of these drives will end up in your gaming PC.
These are intended for server applications and will ship in E1.L, E3.S, and U.2 form factor solutions. But don't be too bummed out if you're only interested in home consumer SSDs—solutions for the data center have a way of trickling into the consumer space over time. That said, we can only imagine what a 30TB or 61TB SSD would cost.

Actually, we can do more than that. As a rough (very rough) way of estimating, we looked up the largest SSD you can buy right now. It's a TeamGroup QX 15TB model that sells for $2,879.99 on Amazon (sale price). Using that as a baseline, a 30TB SSD would fall in the $5,800 range, while a 60TB model would land north of $11,500.
Capacity and pricing don't always scale so neatly, and you also have to account for the early adopter tax when breaking into new territory. Suffice to say, though, huge capacity SSDs are not likely to be affordable in the near future, no matter which market segment they target. 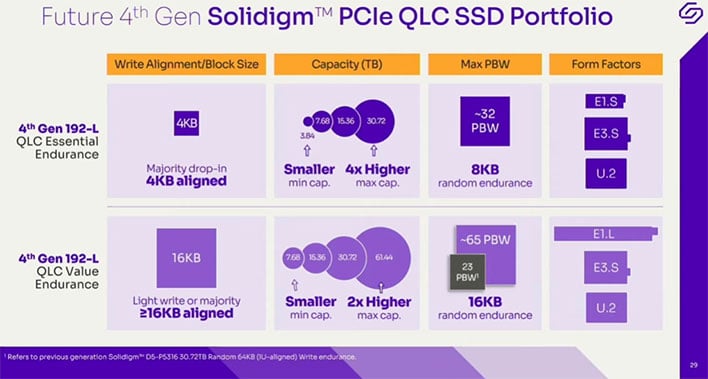 In any event, Solidigm is pushing higher capacities among its Value Endurance and Essential Endurance SSD families. The 61.44TB SSD will be part of the former and will boast a 65 PBW endurance rating. Solidigm also points out that its upcoming capacities are bigger than Western Digital's largest data center HDDs (26TB for shingled, 22TB for conventional).
As for performance, in one of Solidigm's slides the company claims its 4th generation QLC is 6X faster than a competing QLC solution (albeit one it didn't name) for 4K random writes, and 24 percent faster versus TLC. And looking at latency, Solidigm says its QLC is 84 percent better than the competition, and 20 percent better than TLC.
Look for these solutions to ship in the first half of next year.