Solidigm today announced it has begun volume production of a couple of high-speed solid date drive (SSD) lines for enterprise and cloud clients. They include the D7-P5520 and D7-P5620, both of which Solidigm is pitching as the industry's most advanced PCI Express 4.0 family of SSDs, with much improved read and write performance compared to previous generation offerings like Intel's D7-P5510 and DC-4610.

Why the comparison to Intel? Solidigm is a recently established US subsidiary of SK Hynix, created after SK Hynix acquired Intel's NAND and SSD business last December.
"Solidigm is poised to be the world’s next big semiconductor company, which presents an unprecedented opportunity to reinvent the data memory and storage industry," Rob Crooke, former senior VP of Intel who will be appointed CEO of Solidigm, said at the time. "We are steadfast in our commitment to lead the data industry in a way that can truly fuel human advancement." 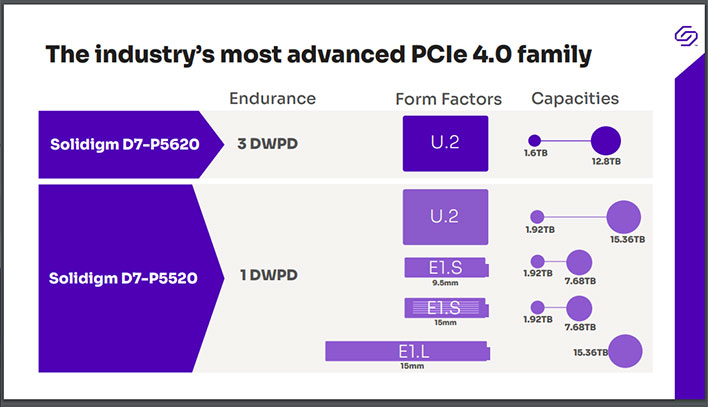 Solidigm essentially inherited the D3, D5, and D7 series SSDs from Intel (as well as some consumer models), and is making quick work pushing out upgraded solutions starting at the top end. The D7-P5620 is offered solely in the U.2 form factor in capacities ranging from 1.6TB to 12.8TB. It's the more durable of the two new drive families, with an endurance rating of three drive writes per day (DWPD).
The D7-P5520, meanwhile, comes in a range of form factors including U.2, E1.S (9.5mm and 15mm), and E1.L (15mm). Capacities range by type, as shown above, with the beefiest ones of the bunch wielding 15.36TB. All of these drives have an endurance rating of 1 DWPD.

Both drive line share some key performance ratings...
Solidigm is also claiming up to 90% IOPs consistency and <0.3% variability over the life of these drives, suggesting that performance won't dip very much over time. 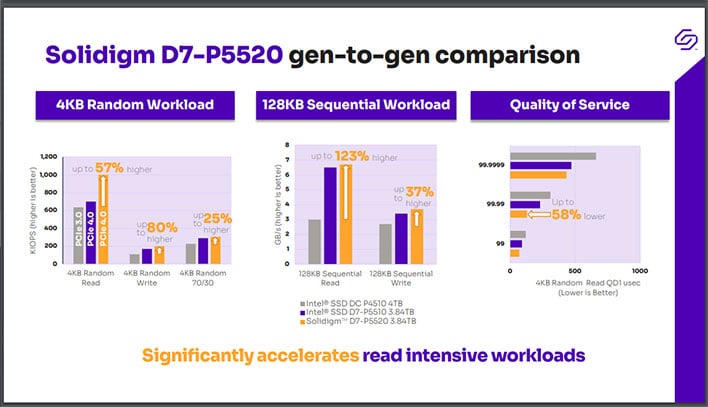 Compared to Intel's DC-4610, Solidigm claims its D7-P5650 offers significantly better read and write performance pretty much across the board, much as one would expect when going from PCIe 3.0 to 4.0. In terms of sequential workloads, Solidigms says the D7-P5650 is up to twice as fast and 20% faster for writes. 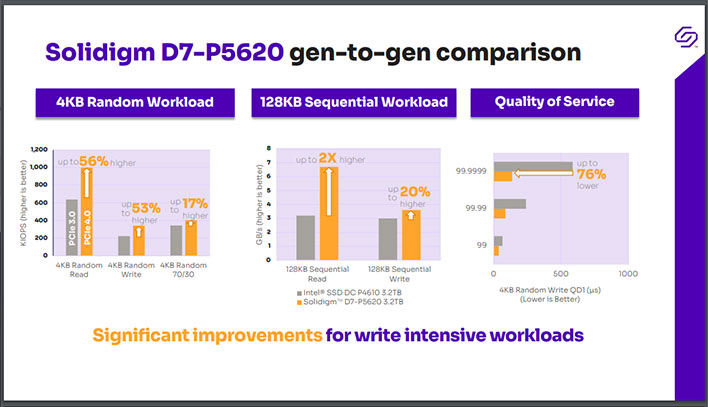 The gen-to-gen gains apply to the D7-P5520 as well, with Solidigm claiming a more than doubling of sequential read performance, and up to 37% faster writes. 4K random reads are writes are much faster as as well, even compared to Intel's PCIe 4.0 D7-P5510.
These new drives are the second collaborative product between SK Hynix and Solidigm, following the unveiling of the P5530 earlier this month. That was described as a "limited release," though, whereas the new D7 models take aim at a broader enterprise and cloud market.