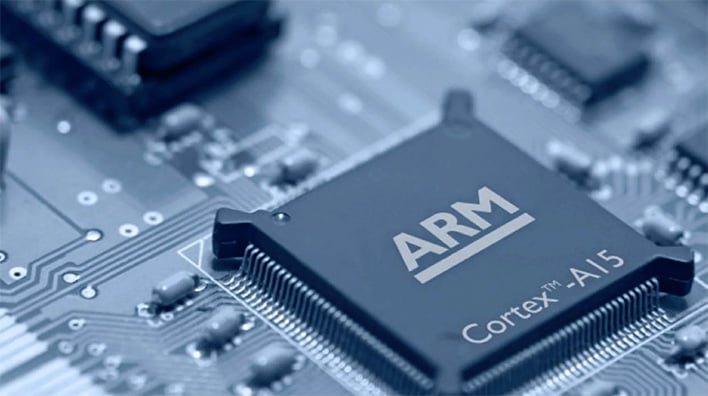 In case there was any doubt that Arm could be switching hands in the near future, its parent company, SoftBank, confirmed it is shopping the semiconductor outfit around and is in talks with a specific bidder. While not mentioned by name, it has been widely reported that NVIDIA has interest in acquiring ARM, despite inevitable regulatory hurdles.
A sale to NVIDIA or any other company is still not a foregone conclusion. SoftBank has options, and it is considering all of them. Should there not be a satisfying offer, SoftBank could retain Arm and take it public again. It could also sell a stake or multiple stakes in Arm, rather than offload the company outright to a single buyer, NVIDIA or otherwise.
"We are having a negotiation and within this negotiation... going public is one of the options, partial sale is one of the options, selling whole is one of the options," SoftBank CEO Masayoshi Son said during an investor presentation, according to The Telegraph.
SoftBank is a Japanese mega-corporate holding company with its hands in a multitude of cookie jars. It acquired Arm, which has headquarters in Cambridge in the UK and San Jose in the US, nearly four years ago in a deal valued at around $32 billion.
Arm is a valuable commodity with a long reach in the tech sector. The vast majority of smartphones and tablets run on hardware based on Arm's designs, including those with Qualcomm's Snapdragon processors inside, and Apple's own home-brewed Bionic chips. Arm's designs can also be found in home routers and a multitude of Internet of Things (IoT) devices,

NVIDIA is said to be in talks about acquiring ARM. If a deal is hammered out, it could send shockwaves through the tech industry. NVIDIA has grown leaps and bounds since its early days, with an increasingly diverse product portfolio taking aim at PC gaming, autonomous automobiles, the data center, and other markets.
The challenge NVIDIA would face is regulatory scrutiny. Arm's clients include just about every tech company under the sun, including AMD, Broadcom, Huawei, Samsung, Qualcomm, and others.
We'll have to wait and see how things play out. In the meantime, Softbank will continue to wave Arm around to potential suitors.