Just over a month ago, Samsung introduced its "game changing" Exynos 2200 processor with an Xclipse 920 GPU based on AMD's RDNA 2 graphics architecture. The combination was hyped as enabling "the ultimate mobile phone gaming experience." And maybe it will after some optimizing. But as of right now, the benchmarks that are out there don't look so great.
Leaks and rumors are one thing, but now that the Galaxy S22 Ultra has launched with two different chipsets, comparison data that is presumably more reliable has started to pop up. The version that launched in the US touts Qualcomm's flagship Snapdragon 8 Gen 1 processor, while the version shipping in Europe and certain other territories sports Samsung's own Exynos 2200 hardware.
The latest benchmark data from the Exynos 2200 comes from YouTuber Golden Reviewer, who got his hands on a Galaxy S22 Ultra with Samsung's own silicon. This eight-core chip consists of a single Cortex-X2 core clocked at 2.8GHz, three Cortex-A710 cores clocked at 2.52GHz, and four Cortex-A510 cores running at 1.82GHz.
Of course, it's the Xclipse 920 GPU that is of most interest as it applies to gaming. To that end, here's how it did...

The video is nearly 14 minutes long, but cutting straight to the chase, the Exynos 2200 averaged 30.2 frames per second in Genshin Impact. It held steady for the most part, though did dip under 20 frames per second on occasion, and briefly hit a low of 13 frames per second (4min38/39sec mark).
In a separate video, the YouTuber benchmarked a Motorola Edge X30 with a Snapdragon 8 Gen 1, running the same game at the same settings. The result? Qualcomm's flagship silicon averaged 52.9 frames per second, which is around 75 percent better than the Exynos 2200.
Granted, this is just a single benchmark that may not be properly optimized itself, and the comparison comes by way of two different handsets. But it's fair to say we expected (or at least hoped) for a much better showing from the Exynos 2200. 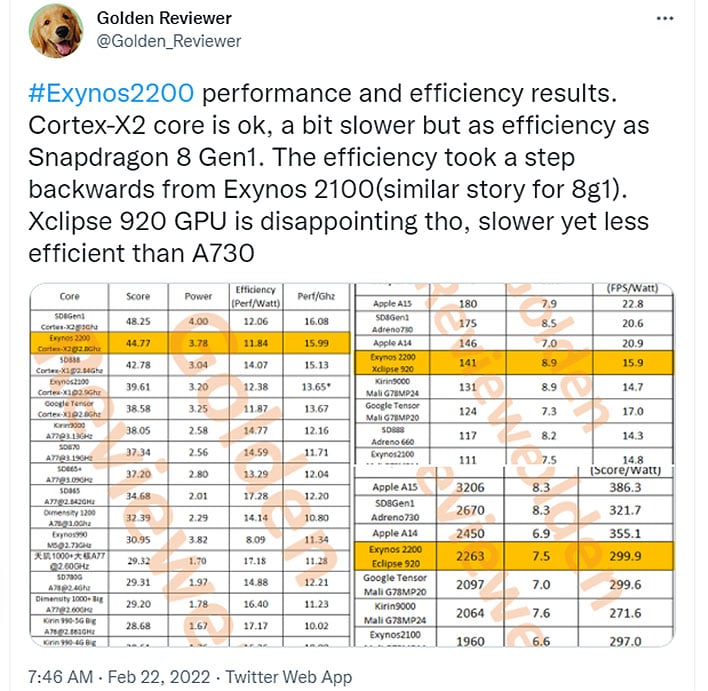 Golden Reviewer also posted a bunch of benchmark data on Twitter comparing the Exynos 2200 to various other chipsets. He notes that "efficiency took a step backwards from [the previous generation] Exynos 2100," though the same can be said for the Snapdragon 8 Gen 1.
When narrowing the focus to the GPU, the Snapdragon 8 Gen 1 again comes out on top, though the margin is at least closer. In GFXBench 3.1, the Exynos 2200 averaged 141 frames per second compared to 175 frames per second (24 percent better) for the Snapdragon 8 Gen 1. And in 3DMark Wildlife Extreme, the Exynos 2200 scored 2,263 compared to 2,670 (18 percent better) for the Snapdragon 8 Gen 1.
The prevailing theory is that Samsung is holding back the GPU on the Exynos 2200 to keep temperatures and battery life at certain levels. So if that's the case, there's room for the Xclipse 920 to stretch its legs, through both firmware updates and driver optimizations. We just might not see a whole lot of tweaking in the Galaxy S22 Ultra.
When Samsung announced the Exynos 2200 last month, AMD said the "Xclipse GPU is the first result of multiple planned generations of AMD RDNA graphics in Exynos SoCs." So hopefully this means future iterations will be more in line with the hype.