SK Hynix announced it has developed its first PIM (processing in memory) solution, which it plans to show off at the upcoming International Solid-State Circuits Conference (ISSCC), the same venue where Intel will talk about its Bonanza Mine crypto mining accelerator. These have nothing to do with one another, except for being interesting developments in their respective fields.
You may recall it was around this time last year when Samsung touted the world's first HBM with PIM. Then several months later Samsung said it had plans to incorporate in-memory AI processing into next-gen DDR5 modules. SK Hynix went in a slightly different direction and developed a sample of GDDR6-AiM (accelerator in memory)

"It has been generally accepted that memory chips store data and CPU or GPU, like human brain, process data. SK Hynix, following its challenge to such notion and efforts to pursue innovation in the next-generation smart memory, has found a breakthrough solution with the development of the latest technology," SK Hynix said. 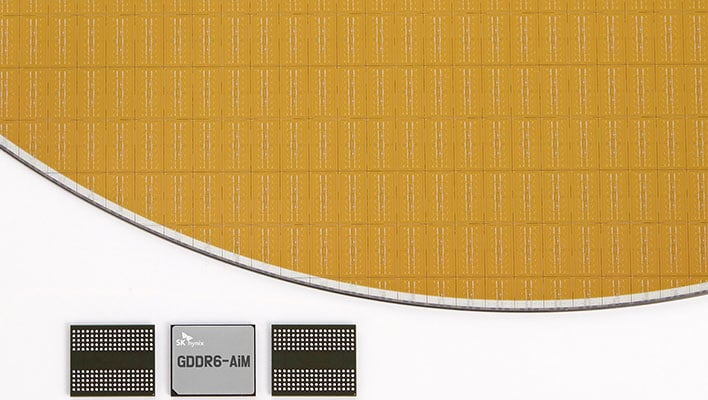 Put another way, SK Hynix added computational functions to GDDR6 memory chips, and the company claims its GDDR6-AiM sample can process data at 16Gbps. It further claims that pairing GDDR6-AiM with a CPU or GPU instead of typical DRAM results in a 16x performance uplift for certain computations.
It's not just about raw performance, either. SK Hynix says its GDDR6-AiM samples runs at just 1.25V, compared to 1.35V for GDDR5 modules. Incorporating PIM also reduces power consumption by 80 percent when moving data to the CPU or GPU, the company says.
SK Hynix envisions GDDR6-AiM being leveraged for machine learning, high-performance computing, and big data computation and storage applications. As such, it is working with SAPEON INc, an AI chip company spun off from SK Telecom, to introduce a new technology that combines GDDR6-AiM with AI chips.