It looks like Intel wants to make a bigger push into the world of cryptocurrency, though not necessarily with its upcoming discrete GPU launch. Instead, the company is on schedule to discuss a new Bonanza Mine chip at the 2022 International Solid-State Circuits Conference (ISSCC), which will run from February 20th to the 24th.
Intel is set to discuss its Bonanza Mine solution on February 23rd, according to the posted docket. There's not much information to be gleaned ahead of time, though we do know this is an ASIC (application-specific integrated circuit), which has become the popular way of mining digital currencies like Bitcoin that are no longer effectively mined on GPU hardware (or on laptops from 1989). 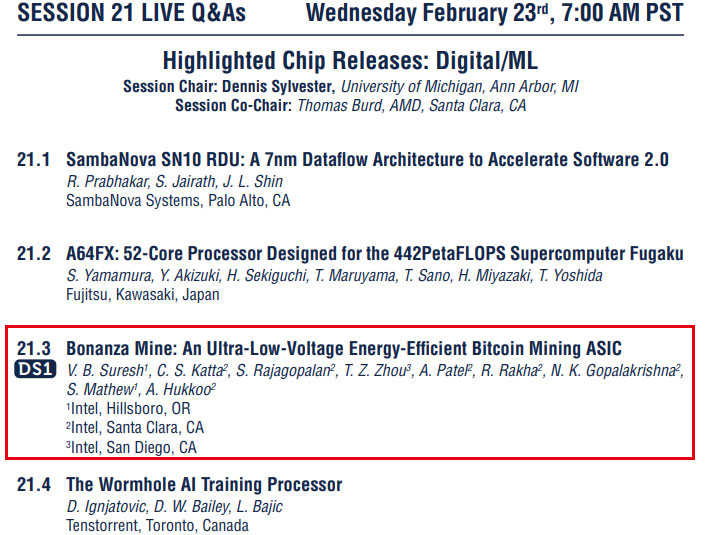 Bitcoin is precisely what this is designed for, apparently. The listing reveals that this is an "ultra-low-voltage energy-efficient Bitcoin mining ASIC," as shown above. So in essence, Intel could be competing directly against Bitmain Technologies, which makes and sells a variety of ASICs, such as its Antminer lineup (some of which are liquid cooled, like the S19 Pro+ Hyd).
Part of what's interesting about this play is it comes at a time when Intel is getting ready to introduce its first modern discrete GPUs, starting with Arc Alchemist. Intel hasn't said if it will implement a hashrate limiter on its Alchemist GPUs like NVIDIA does on some of its consumer cards. But this would be a way for Intel to generate additional revenue from the cryptocurrency sector without necessarily doing so on the GPU side.
That might be overly optimistic. However, it's worth noting that Intel's graphics boss Raja Koduri recently stated that Intel was working on a blockchain solution, and he made a point to say it wasn't on the GPU side. The comments came during a livestream on Dr. Lupo's YouTube channel.
"I think blockchain is a transaction thing that is run much more efficiently than the current burning of hardware cycles, is something we are working on." Koduri said, "And that's not a GPU thing, so don't try to confuse it as a GPU thing. No, no, no—GPUs will do graphics, gaming, and all those wonderful things. But being able to do much more efficient blockchain validation at a much lower cost, much lower power, is a pretty solvable problem. We are working on that, and at some point in time, hopefully not too far into the future, we will kind of share some interesting hardware for that."
Those are encouraging comments, though we have more questions than answers surrounding Arc Alchemist. And that will continue to be the case until it actually ships. As for the Bonanza Mine reveal, we'll revisit the topic when Intel shares more info.