Star Wars fans are likely familiar with the scene where Luke Skywalker receives a new hand. Luke twitches his hand as he responds to being poked by a robot. This kind of technology is no longer only attainable in fantasy or science fiction. Researchers at RMIT University have created new electronic skin that replicates the way human skin feels pain.

According to lead researcher Dr. Madhu Bhaskaran, “We’re sensing things all the time through the skin but our pain response only kicks in at a certain point, like when we touch something too hot or too sharp.” Previous technologies were unable to mimic what human skin typically does when it feels pain from temperature or pressure changes. However, this artificial skin reacts nearly instantly when it reaches its pain threshold.

This particular skin relies on three sensors -- pressure, heat, and pain sensors. These sensors in turn incorporate three kinds of crucial technologies. The first technology is “stretchable electronics.” Stretchable electronics combine “...oxide materials with biocompatible silicone to deliver transparent, unbreakable and wearable electronics as thin as a sticker.” The second is temperature-reactive coatings that “transform” when exposed to heat and cold. These “self-modifying” coatings are 1,000 times thinner than human hair. The last technology is referred to as “brain-mimicking memory.” These electronic cells are able to replicate how the brain uses long-term memory to remember information like the sensation of pain. 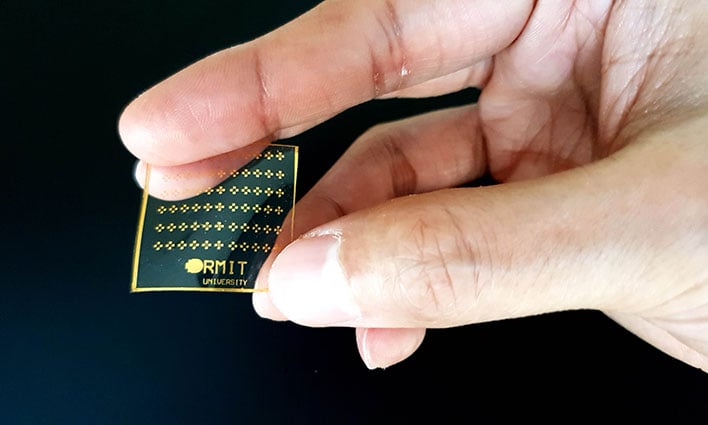 The pressure sensors rely on the stretchable electronics and long-term memory cells, while the heat sensors use the temperature-reactive coatings and memory. The pain sensors need all three technologies to function. The team at RMIT University in Melbourne, Australia have just filed a patent for this combination of technologies.

This research could potentially have a far-reaching impact. According to the researchers, “sensory skin feedback is indicative of health.” These technologies could therefore be essential for those attempting to replace damaged skin. It could also be useful for those attempting to alter skin sensitivity for “applications in defense and sports” and in robotics.

Other researchers are more interested in the ways skin can become a surface for mobile computing. Google recently worked with researchers at Saarland University in Saarbrücken, Germany to develop SkinMarks. SkinMarks are temporary tattoos with conductive ink that could be used to control computers.