NASA's Webb space telescope has revealed an exoplanet's atmosphere in a way never seen before. The highly-advanced telescope viewed the molecular and chemical profile of a distant planet's atmosphere, giving scientists and astronomers an idea of how clouds of this nature may look up close.

The James Webb Space Telescope (JWST) turned its extremely-sensitive instruments toward the atmosphere of WASP-39 b, a "hot Saturn" (a planet that is nearly as massive as Saturn, but in an orbit tighter than Mercury), which orbits a star approximately 700 light-years from Earth. The data collected has excited scientists, as they have been hopeful JWST could provide never before seen data concerning the atmospheres of smaller, rocky planets similar to those in the TRAPPIST-1 system.

"We observed the exoplanet with the multiple instruments that, together, provide a broad swath of the infrared spectrum and a panoply of chemical fingerprints inaccessible until (this mission)," remarked Natalie Batalha, an astronomer at the University of California, Santa Cruz, who helped coordinate the latest research. "Data like these are a game changer," she added.

The new findings have been the subject of five new scientific papers, three being in press and two under review. Perhaps the most intriguing realization to emerge is the first-ever detection of sulfur dioxide in an exoplanet's atmosphere. Sulfur dioxide is "a molecule produced from chemical reactions triggered by high-energy light from the planet's parent star," NASA explains. As an example, the protective ozone layer in the upper atmosphere here on Earth is created in a similar method. 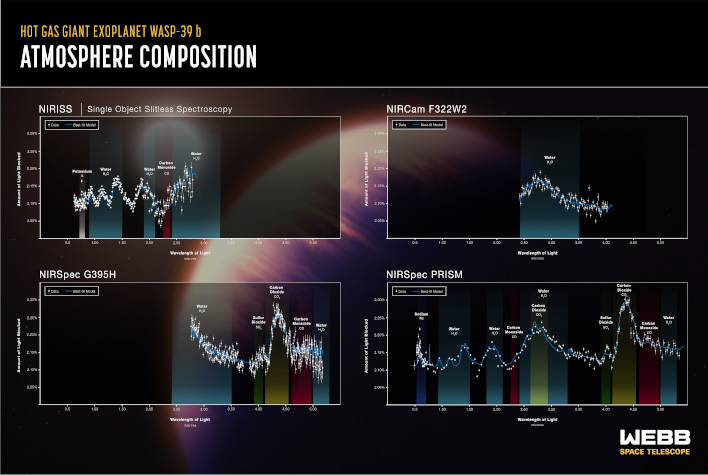 "This is the first time we see concrete evidence of photochemistry - chemical reactions initiated by energetic stellar light - on exoplanets," explained Shang-Min Tsai, a researcher at the University of Oxford in the United Kingdom, and co-author of the paper explaining the origin of sulfur dioxide in WASP-39 b's atmosphere. "I see this as a really promising outlook for advancing our understanding of exoplanet atmospheres with (this mission)."

The discovery of sulfur dioxide in the atmosphere of WASP-39 b led to another first, scientists applying computer models of photochemistry to data that needs such physics to be explained. The hope is that doing this will improve future models to have the "know-how to interpret potential signs of habitability in the future."

In order to detect light from WASP-39 b, Webb tracked the planet as it moved in front of its host star. This allowed some of the star's light to filter through the exoplanet's atmosphere. Other atmospheric materials detected by Webb include sodium, potassium, and water vapor. This confirmed past space and ground-based telescope observations, along with finding new fingerprints of water, which have never been seen before.

"We had predicted what (the telescope) would show us, but it was more precise, more diverse, and more beautiful than I actually believed it would be," stated Hannah Wakeford, an astrophysicist at the University of Bristol in the United Kingdom.

According to Laura Flagg, a researcher at Cornell University and a member of the international team that participated in the findings, scientists and astronomers are going to be able to see the "big picture of exoplanet atmospheres." She concluded that knowing everything will be rewritten, "is one of the best parts of being a scientist.