Intel’s 12th generation Alder Lake processors are right around the corner, with an official announcement coming as soon as October 27th. However, in the lead-up to the launch, most of the leaks and news have surrounded the Alder Lake-S desktop family rather than the related laptop-centric processors. Thankfully, today we have some information to deliver on the laptop front courtesy of SanMax.

Hermitage Akihabara posted images of sample SanMax DDR5 memory modules on display at PC Shop Arc. The 252-pin SO-DIMMs are rated for DDR5-4800 speeds (CL40) and operate at 1.1 volts. SanMax is using Micron memory for these modules, with these samples coming in at a 32GB capacity. 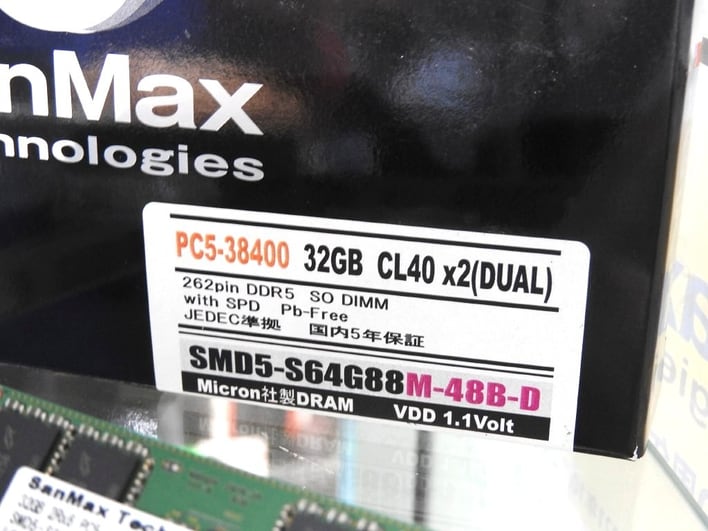 The 32GB capacity for these SO-DIMMs is par for the course with DDR5 modules announced over the past few months. We’ve seen an across-the-board doubling in capacity compared to their DDR4 counterparts. Current DDR4 SO-DIMMs are more commonly found in 16GB and lower capacities (although you can find 32GB single-stick memory). The move to DDR5 should make 32GB capacities more widespread, which is good news for laptop power users that require a lot of memory.

Intel’s 12th Alder Lake processor platform supports DDR5 memory and PCIe 5.0. However, motherboard manufacturers will also have the option of pairing Alder Lake processors with current-generation DDR4 memory to hit lower price points. With its Alder Lake onslaught, Intel will beat AMD to the punch with DDR5 and PCIe 5.0. While AMD is expected to adopt DDR5 memory with its Zen 4 processor family in 2022, PCIe 5.0 support isn’t expected at launch.

According to earlier reports, Alder Lake systems could begin shipping as soon as November 4th, so stay tuned for more details in the coming weeks.