Samsung's upcoming Galaxy S22 launch is shaping up to be quite the reveal, and not just because a new flagship smartphone is on the horizon. Related to that, there's an interesting side story taking place—will or will not the Galaxy S22 come packing Samsung's own Exynos 2200 system-on-chip with an infusion of AMD's RDNA 2 graphics? The latest chatter says it will not.
Let's back things up for a moment. Samsung and AMD have been partnering on injecting the latter's graphics architecture into the former's mobile silicon. It was rumored the Galaxy S22 would deliver the fruits of this partnership with Samsung's own Exynos 2200 chip, and on December 30, 2021, Samsung even posted a teaser on Twitter.
"#PlaytimeIsOver. The gaming marketplace is about to get serious. Stay tuned for the next #Exynos with the new GPU born from RDNA 2. January 11, 2022," Samsung wrote.
Well, that tweet was deleted a few days ago, and that act fueled speculation that something was amiss. However, Samsung then offered up a comment to Business Korea saying it plans to unveil the Exynos 2200 "at the time of launching a new Samsung smartphone," and further stated, "There are no problems with the AP's production and performance."
Except maybe there actually is. As we wrote about yesterday, a prominent leaker (@UniverseIce) claimed Samsung is having trouble ramping up the GPU's frequency above 1.3GHz. As the story goes, Samsung wants to hit 1.9GHz, but is running into thermal issues when going past 1.3GHz.

Samsung's Galaxy S22 Is Coming But What SoC Will It Use?

Today is a new day, and with it comes a new rumor: Samsung has cancelled plans to use its Exynos 2200 inside any of its Galaxy S22 phones. Not just the different SKUs, but the variants that get shipped to different territories. In the past, Samsung has used Qualcomm's silicon in Galaxy devices that ship to the US and its Exynos silicon in certain other territories. There was speculation that all Galaxy devices would rock the Exynos 2200 chip with RDNA 2 graphics this time around. 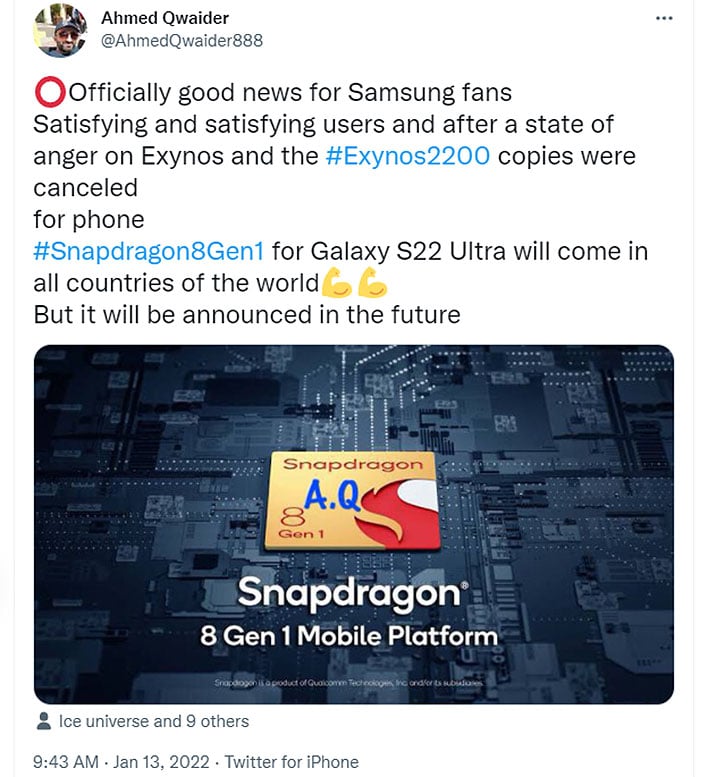 According to multiple leakers, the Exynos 2200 is no longer in the cards. This can be seen in the tweet above and by @dohyun854, and is also claimed by Super Roader, an ex-Samsung employee, in a recent YouTube video.
They all say the Snapdragon 8 Gen 1 will accompany the Galaxy S22 in every form and in every territory. We can't say if that's actually true, but we could also see it happening. Qualcomm's latest flagship SoC offers strong performance across the board, and especially with AI workloads, based on what we saw when we previewed the chip last month. 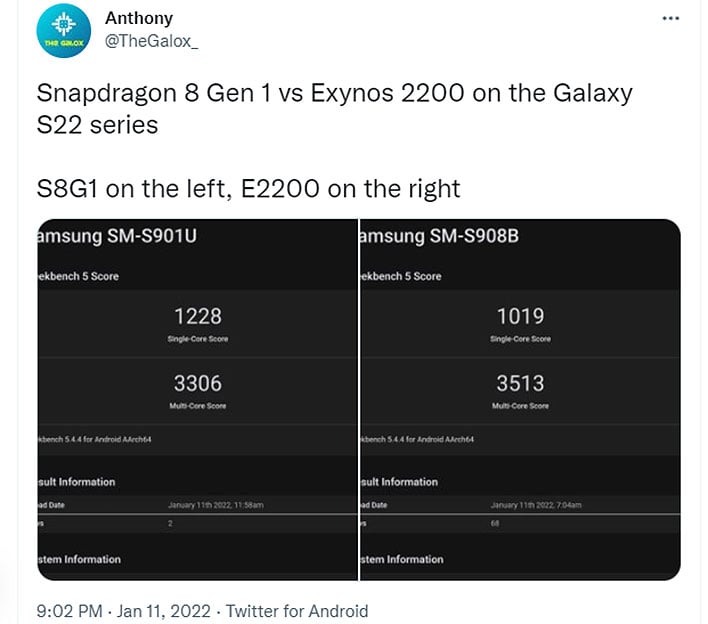 Just when we think there might be clarity, however, an alleged Exynos 2200 benchmark run on Geekbench has it beating the Snapdragon 8 Gen 1, and supposedly did it without the Cortex-X2 super core running. Impressive, if true.
The caveat there (well, one of them) is that those scores only reflect the CPU performance, not graphics. And since the present rumor suggests Samsung is having trouble getting the RDNA 2's clock speed at the desired level, the Geekbench scores don't necessarily debunk the chatter.
We'll see fairly soon—Samsung is expected to unveil the Galaxy S22 series next month.