You have to love it when a retailer jumps the gun on an unreleased product. Such is the case with Samsung's upcoming Galaxy Buds+ wireless earphones. A retailer in Europe sold and shipped a set to a customer who also happens to be a technology journalist, who promptly uploaded an 11-minute unboxing video.
It's not clear which retailer in Europe sold and shipped the Galaxy Buds+ prematurely. Regardless, this is not an obscure leak. In the video, we get several clear looks at the retail packaging, and of course the wireless earbuds themselves, along with the included charging case. Have a watch on your coffee break (this being a work day and all)...


The above unboxing comes courtesy of Rland Quandt from WinFuture. According to his rundown, the Galaxy Buds+ sport a pair of drivers in each earphone, including a woofer and a tweeter. And in response to a user asking if these could be fakes, Quandt replied, "These are the real deal." 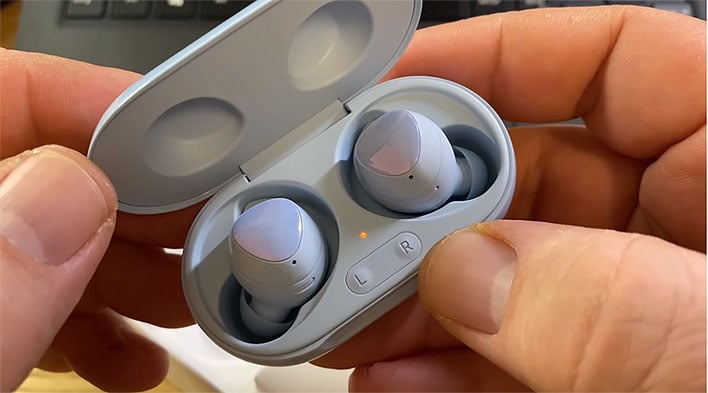 Samsung claims the Galaxy Buds+ deliver 11 hours of playtime, or 22 hours if factoring in the charging the case. According to Quandt, the battery level dropped to 54 percent after 3.5 hours of "loud punk rock music." That would put the actual battery life at a bit over 7 hours, though obviously it will vary by person depending on specific usage.
Quandt says the Galaxy Buds+ fit his ears well and that the "sound is fine." He also said that others indicated he sounded like was talking through a walkie-talkie on phone calls, and that ambient noise was present. However, "incoming sound is fine," Quandt reports.
According to Quandt, the Galaxy Buds+ will retail for $169 when they release. That's up from $149 for the first-generation Galaxy Buds.
It's not just the Galaxy Buds+ that made an early showing on the web. Over on Twitter, Max Weinbach from XDA Developers posted a short video clip and some details pertaining to Samsung's upcoming Galaxy Home Mini smart speaker.

The Galaxy Home Mini is supposed to launch on Wednesday, February 12, a day after Samsung's Galaxy S20 event. Ahead of the launch, Weinbach provided several details of what looks like an engorged Amazon Echo speaker. The speaker is outfitted with an IR blaster, and therefore can be used to beam commands to TVs and other devices up to 40 feet away.
Users can expect the usual round of smart functions (powered by Bixby), like looking up the weather, fetching news, and firing up playlists. Interestingly, the Galaxy Home Mini is missing certain features, including 5GHz connectivity and a 3.5mm audio-out port. One of the photos also indicates it is powered over micro-USB instead of USB-C.
There's no word yet on how much the Galaxy Home Mini will cost.