Samsung will eventually get around to unveiling its Galaxy Fold 3 (and Z Flip 3), as recently leaked marketing images revealed. Unfortunately, those images were some of the lowest quality pictures we have ever seen, and did not provide a crystal clear look of the upcoming phone's details. That said, a recently published patent application hints that a surprising design decision may accompany the Galaxy Fold 3—say goodbye to physical buttons.
Well, maybe the physical buttons are going away, or maybe Samsung is toying with the idea for some other handset down the line. Either way, Samsung spent 110 pages describing a "foldable electronic device" that replaces the power, volume, and other physical buttons with touch-sensitive buttons, with support for gestures too. 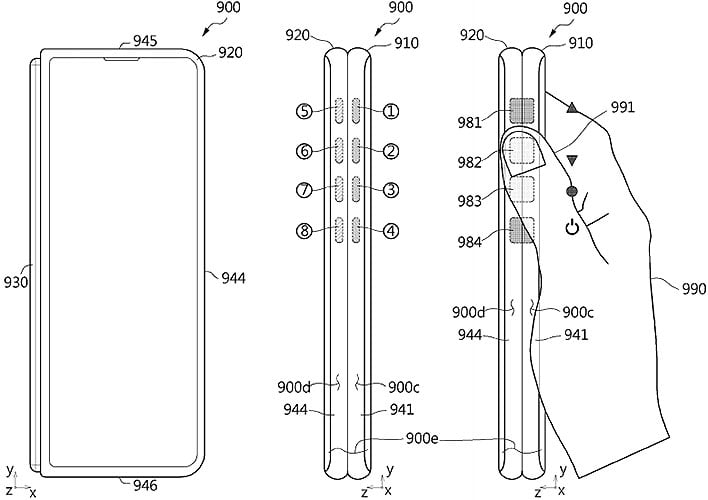 It should be noted that nowhere in Samsung's patent application (PDF) is there a reference to the Galaxy Z Fold 3, or any specific handset. However, the timing of its publication is interesting, as Samsung will presumably be launching more folding phones in the very near future. And as Samsung outlines in its patent application, moving to virtual buttons could make things easier on users.
"When the user attempts to enter a key by pressing the physical button with a thumb while holding the electronic device in the folded state with one hand, as the physical button is exposed on the side of the surface of one housing, it may be difficult to have a user experience holding an electronic device such as a bar-type smartphone with one hand and pressing a button placed on its side surface with a thumb," Samsung explains.
Samsung also points out that when folded, the concentrated force of pressing a physical button could even damage the hinge. And on top of it all, from a design standpoint, it is "becoming increasingly difficult to arrange physical buttons" on increasingly slimmer phones.
"One embodiment of the disclosure may provide a foldable electronic device capable of realizing various key functions without exposed buttons by changing a physical method of controlling buttons to a touch method," Samsung proposes.
There is a ton more text to digest in the massive document, if this is the sort reading you are into. However, the simple gist of it is, Samsung sees advantages in using virtual buttons in place of physical ones on a folding smartphone. And with gestures in play, users could swipe up and down to adjust the volume or gently squeeze the phone to initial other, potentially custom interactions.
As to the Galazy Z Fold 3, we anticipate it will arrive with a Qualcomm Snapdragon 888 processor or the Plus model, along with increases in RAM, storage, battery capacity, and camera performance.

What do you think, would you be interested in a phone that ditches physical buttons in favor of virtual ones, or is that deal breaker? Sound off in the comments section below!