No, you have not suddenly entered into a parallel universe despite what a recent teardown of Samsung's flagship Galaxy S22 Ultra might suggest. And what exactly does it suggest? Simply put, that Apple's own flagship smartphone, the iPhone 13 Pro, is less of a bear to repair. It's all relative, of course—it takes some serious courage and skill to pry open a premium smartphone.
As time has gone on, easier repairs have been sacrificed for thinner and more premium designs. That doesn't mean high-end build quality has to automatically be at odds with easier repairs, but more often than not that ends up being the case. Same goes for the Galaxy S22 and Galaxy S22 Ultra, which the folks at iFixIt put on the teardown operating table, scalpel in hand.

"With a lot of heat, a suction handle, and some adhesive slicing—no surprises here—we … oops. The noble plastic back experiment of the S21 seems to have failed, Samsung is still using fragile glass backs, and, thanks to some impressive camera bumps, our mat isn’t able to evenly distribute heat," the site notes.
Stubborn adhesive means you'll need to take your time getting into the guts of the phone, but with some patience and persistence, it's not that bad. Once inside, you'll spot a relatively clean layout. Some of the parts can be removed with ease, like the daughterboard (just remove screws, detach the cables, and it lifts right out). 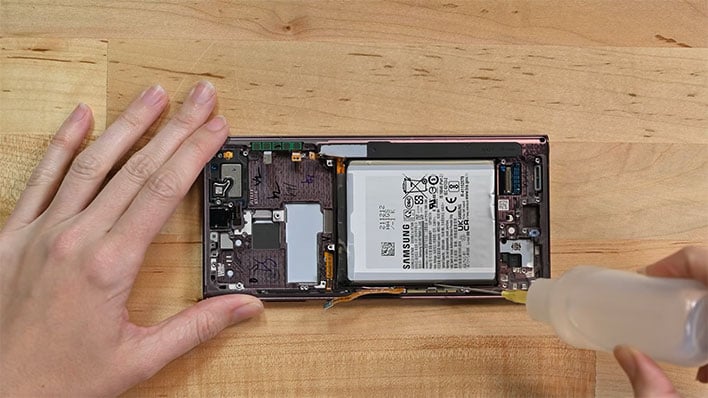 That's not the case for the battery. Removing it involves a "tedious combo isopropyl alcohol, suction cup lifting force, and patience" because of the glue and lack of pull-tabs. This is a crucial area where the iPhone 13 Pro holds an advantage, as it is easier to replace should the need ever arise.
The teardown team also took note of an upgraded cooling scheme in the latest round of Galaxy handsets.
"Come to think of it, we’ve seen a lot of heat dissipation efforts in here: oodles of graphite tape, some serious thermal paste, and now this beefier vapor chamber? At a guess we’d say that catching up to Apple silicon is starting to make Samsung sweat, pun intended," iFixIt said.
The site's suggestion to Samsung is to make its Galaxy phones just a few millimeters thicker to make room for more heat dissipation and the battery (so that it's easier to remove). We'll see next round if Samsung goes in that direction.
When the dust settled, the Galaxy S22 Ultra and Galaxy S22 both scored a 3 out of 10 on the site's repairability index, versus the iPhone 13 Pro scoring a 6.