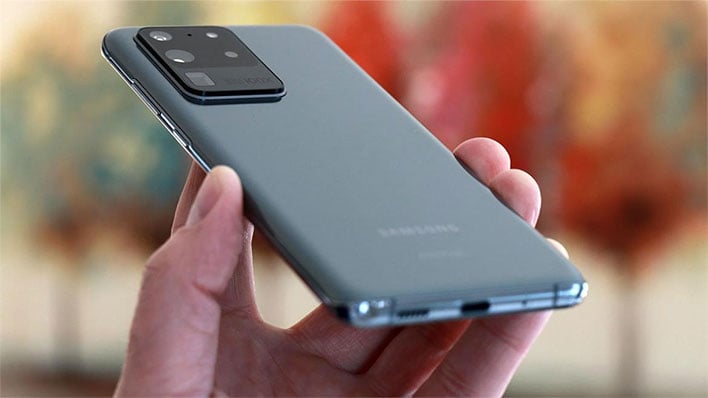 The last thing you want to happen when dropping four figures on a smartphone is to see it fall apart. Unfortunately for some buyers of Samsung's flagship Galaxy S20 Ultra, that is sort of happening. It is not coming apart at the seams or anything like that, though oddly enough, some users report the glass covering on the rear camera bump developing cracks for no apparent.
This is not happening to every Galaxy S20 Ultra owner, and perhaps only a very small percentage of them. However, there is a growing thread on Samsung's support forum for this very issue. The complaints first showed up around a month and a half ago, with new complaints added as recently as yesterday. Those affected say practically the same thing—the cracks and breaks develop despite never having dropped or banged their smartphones.
The person who started the thread claims the glass on the rear camera bump of their Galaxy S20 Ultra broke while it was in their pocket, saying it developed a hairline crack that extends from one side to the other.
"I have the same problem, I contacted Samsung and they said its' not their fault . The camera is so fragile that it will break without dropping it. I'm going to get it fixed then return this garbage phone," another user wrote.

@SamsungMobileUS @UnboxTherapy @ZacksJerryRig @verge I'm wondering if @SamsungMobile will have anything to say about the camera glass breaking on the S20ultra while setting on my wireless charger. Tons of ppl on Samsung community saying the same thing #S20Ultra #Samsung pic.twitter.com/y7uSeLC2Vg

Several others have chimed in with similar complaints, including on Twitter.

"Both mine and my wife's have cracked glass on the cameras. Neither of us have dropped or been rough with them. Both are in cases. Pretty sure both broke in pockets," another user stated.
It's not clear if this is a design flaw or if users are not being entirely upfront with how they are handling their phones. The large rear camera bump protrudes from the body of the smartphone, making it more susceptible to impacts on hard surfaces. Nevertheless, some users claim they are seeing cracks occur even when their smartphones are in a protective case.
Either way, Samsung is not taking responsibility, at least not for now.
"We are sorry to hear about the crack on your camera lens. Unfortunately Samsung Phone warranties does not cover cosmetic damage. If you are enrolled in Samsung Premium Care, you can set up a repair at an authorized Samsung Repair Center or Partners. Also does not hurt to check if you have insurance via your service provider," a Samsung 'product expert' wrote in the support forum.
It's costly to have this type of damage repaired. Those who are enrolled in the Samsung Premium Care program are looking at $100 to fix the glass, while it runs nearly $400 for those who are not enrolled.
If you own a Galaxy S20 Ultra, we'd like to hear from you, and specifically whether or not you've run into this issue. As always, sound off in the comments section below!