Given how much a top-tier smartphone can cost, it can be pretty stressful if a problem crops up, especially one that affects the display. To that unfortunate end, some Galaxy S20 owners have complained about an odd white and green screen issue. Those affected claim the issue starts off mild then becomes worse over time, to the point where the phone is essentially unusable.
We have never encountered the problem ourselves, and in fact we regard the AMOLED screens Samsung uses on its high-end devices as some of the best around, in terms of overall image quality. They simply look fantastic when working properly. So how prominent is the issue? It does not seem to be particularly widespread in the grand scheme of things, but there are definitely reports of screen degradation.
Here's an example...


The above video was posted a couple of months ago, and it shows a Galaxy S20 Ultra 5G succumbing to the issue. According to the phone's owner, it started to show flickering with tiny lines when the problem first manifested around the beginning of April, which is about a year after they purchased the phone.
"No major fall, with Samsung case ever since and well-cared. With the built-in plastic screen protector since 1st day and just removed it last month 3rd wk of April. Bare screen since then and no scratches observed even up to now," the phone's owner says.
Over time, the display progressed from flickering to a green bleed seeping from the upper-right corner, until the entire screen is awashed in green. The issue comes and goes so technically the phone still works, but for all intents and purposes, this is a green screen of death. 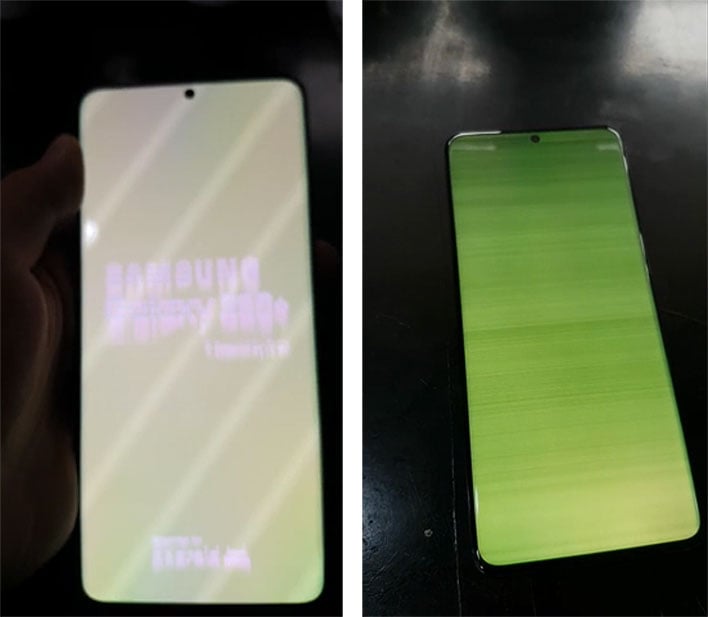 An owner of a Galaxy S20+ posted a video of a similar issue on Reddit, and claims they have seen "upwards of 500_ people having the same problems on various posts on different platforms," most of which were posted between May and June. If that is true, it could be a bad batch.
On a Samsung community forum thread in Europe, another user said they are experiencing the same thing. A Samsung representative agreed that this sort of thing should be happening, and asked if it apps when running any specific games or apps.
"There's no app in particular. It also happens in home screen. Maybe in other apps but not that noticable unlike when I am playing. The flickering started few days ago. maybe 2 or 3. The green display happened after reset. It is green even when the charging while the phone is off," the user replied.
The rep suggested booting into Safe Mode just to be sure that a third-party app is not the culprit. Instead, the user tried a full-blown factory reset, and the issue persisted. They ended up getting their screen replaced, and claimed the tech told them possible causes for this sort of thing include getting the phone wet, dropping the phone, or a software bug.
Have you encountered this issue? If so, drop us a line in the comments section below.