We are still in the early days of folding smartphones, with just the Samsung Galaxy Fold and Huawei Mate X reaching the market so far in limited numbers. Those two devices will soon be joined by the Motorola Razr, which takes on a more pocketable portrait-style form-factor.

The main problem with these first-generation devices -- besides their fragile hinge mechanisms -- is their exorbitant pricing. The Mate X retails for $2,600, while the Galaxy Fold is priced at $1,980. Samsung, however, hopes to make sticker shock a thing of the past with its second-generation folding smartphone.

According to The Korea Herald, Samsung will first display its next-generation foldable smartphone alongside the Galaxy S11 in February, but it won’t actually go on sale later in 2020. According to the report, the smartphone will likely be released in August and will come with a much more palatable price tag of around $900. The $900 price point would put it right in line with pricing for Samsung's Galaxy S family of smartphones, so it will be interesting to see what kind of compromises will have to be made to cut the price in half from the first to second generation.

“Samsung’s plan to expand the foldable product lineup depends on the market response to the clamshell model slated for launch in 2020, but it is clear the firm will increase the lineup,” said Kyobo Securities analyst Choi Bo-young in a statement to The Korea Herald. 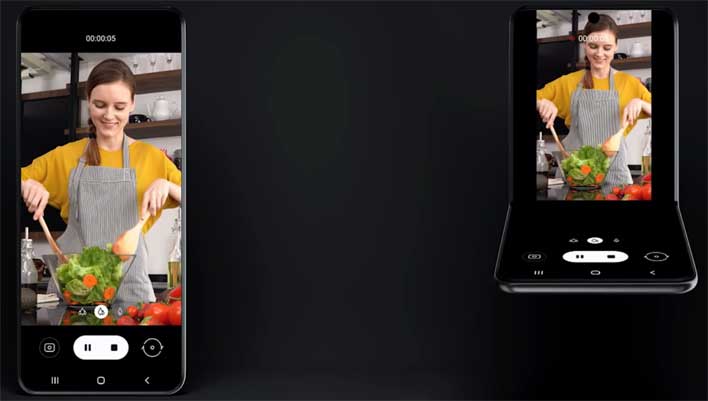 As for the device’s design, the gurus over at Lets Go Digital have posted renders of what this alleged Galaxy Fold 2 could look like based on a European trademark filing. Looking at it, the design looks like a traditional smartphone save for the "hideaway hinge" on the back of the device. In fact, in looks quite similar in form-factor to the Motorola Razr -- minus the large chin at the bottom. However, it remains to be seen if Samsung can actually pull off the execution of a device this thin and attractive with its second at-bat.

Samsung has reportedly sold 500,000 units of the original Galaxy Fold since its (re)launch in September. However, analysts expect that figure could swell to 20 million units by 2021.