Samsung has already laid out plans to expand its folding devices lineup, and the company recently made a strong impression with the Galaxy Z Fold 3 and Galaxy Z Flip 3 (which have so far received favorable reviews). However, a new leak now suggests that Samsung's folding aspirations are about to get larger, much larger.

While there's not much else behind the leak, popular gadget leaker Ice Universe tweeted a single banner: Galaxy Book Fold 17. There was no mention of availability, specs, or even a hint of pricing, but the development of such a device should not surprise anyone. 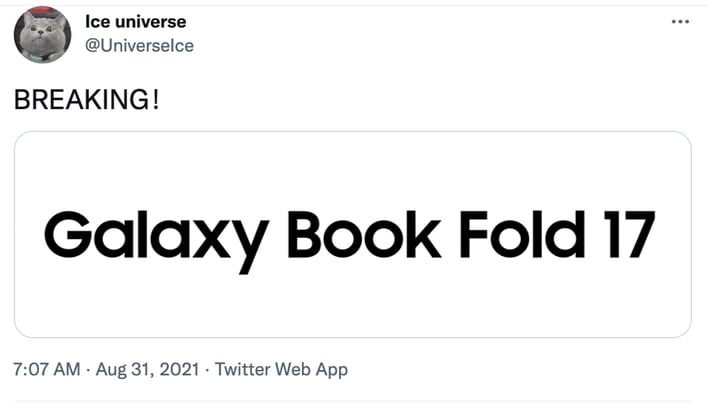 Earlier in 2021, Samsung showed off numerous concepts of smartphones and laptops using folding or rollable displays at SID 2021. One such device was a 17-inch laptop with a large display that folded in half. When extended, the top half of the panel served as the display, while the bottom half presented keyboard and touch controls for various apps.

This form factor is quite an intriguing design that we've previously seen with the Lenovo ThinkPad X1 Fold. The ThinkPad X1 Fold features a 13-inch 12K folding OLED display and starts at $2,249.

Given the larger form-factor of the alleged Galaxy Book Fold 17, we'd assume that 4K panel options would be available. And the concept shown in the embedded video above revealed slim bezels all around and an under-display camera, as seen on the new Galaxy Z Fold 3.

The possible launch of a Galaxy Book Fold 17 would be an exciting development in the laptop sphere, and we'll be very interested in seeing what kind of hardware will power the device. For example, will it use 12th generation Intel Alder Lake processors, or perhaps a more PC-centric version of its upcoming Exynos 2200 SoC running Windows 11 on Arm? Whatever the case, we'll be following the development of this new folding device, so stay tuned...