Samsung's Galaxy A launch event is underway, and right off the bat the company announced a new mid-range smartphone that's been the subject of numerous leaks and rumors, the Galaxy A53. it's a follow-up to last year's Galaxy A52, and while it is not a drastic departure from its predecessor, the Galaxy A53 does deliver some notable upgrades. Samsung also unveiled a Galaxy A33 (more on that in a bit).

As with before, the Galaxy A53 is rocking a 6.5-inch Super AMOLED display with a 2400x1080 resolution and fast 120Hz refresh rate. It wasn't all that long ago when a 120Hz refresh was reserved for higher-end smarphones, and especially those targeting gamers. Now it's quickly becoming a mainstay of the mid-range space because of handsets like this one. Additionally, the display offers up to 800 nits of brightness and features a new algorithm that's supposed to make it easier to see in outdoor lighting.

Samsung's also sticking with an 8-core processor, which this time is an unspecified SoC built on a 5-nanometer manufacturing process (probably the Exynos 1280) with two performance cores clocked at 2.4GHz and six efficiency cores running at 2GHz. This is paired with 6GB or 8GB of RAM and 128GB or 256GB of built-in storage. There's also a microSD card slot to add up to an additional 1TB of storage. 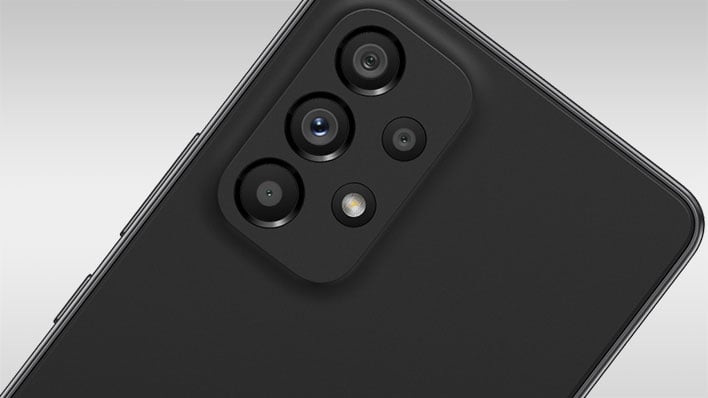 We'll have to wait and see how the performance compares. As for the camera arrangement, the Galaxy A53 bumps up to a quad-lens setup on the rear. These consist of a primary 64MP camera (F/1.8 with autofucus and optical image stabilization), a 12MP ultra-wide lens (f/2.2, fixed focus), and two 5MP shooters (both f/2.4 and fixed focus), one a depth sensor and the other for macro shots. Then on the front, there's a 32MP (f/2.2) for snapping high-resolution selfies.
"The Galaxy A53 5G’s quad-camera system includes a new and improved 64MP Main Camera that takes crisper shots, high-resolution 32MP front camera for the best selfies, and smooth videos and photos powered by advanced OIS and VDIS technology. Fueled by a brand new 5nm processor, Galaxy A53 5G’s innovative AI-powered camera makes all your shots look great – even in low lighting," Samsung says.
Samsung's also touting an improved Night mode that automatically synthesizes up to 12 frames at once, the promise being brighter and crisper images with less noise and blur. Filming in low light is supposed to be better this time around too—the phone's framerate automatically adjusts for brighter and clearing recordings. 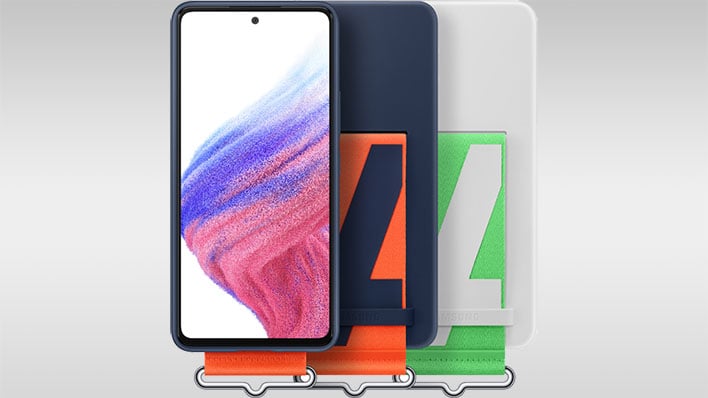 There are some other feature upgrades as well. Photo Remaster heads to the Galaxy A series for the first time and will help restore old photos by suggesting lighting and resolution, while Object Eraser gets rid of photo bombers in the background.

"Meanwhile, improved Portrait Mode captures depth and subject outlines more accurately with dual cameras and powerful AI. And with Fun mode, all your favorite moments can be amplified using playful filters and effects that now work with the ultra-wide lens," Samsung says.
Samsung equipped the Galaxy A53 with a 5,000 mAh battery that it says can last up to two days. It also supports 25W 'Super Fast Charging'.
The Galaxy A53 5G releases on March 31 starting at $449.99 in the US and £399 in the UK. 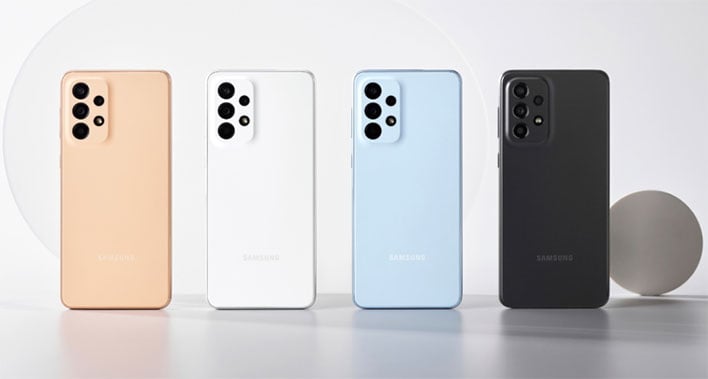 Samsung also unveiled the Galaxy A33, another phone that was heavily leaked and rumored. It's essentially a slightly smaller and toned down version of the A53, though there are more similarities than differences.
For this one, buyers are looking at a 6.4-inch FHD+ Super AMOLED display with a 90Hz refresh rate. It's powered by the same set of components, including an octa-core SoC, 6GB or 8GB of RAM, 128GB or 256GB of built-in storage, and a microSD card to add up to 1TB more of storage.
It also boasts a quad-camera arrangement, though it's a little different...

And on the front, it sports a 13MP (f/2.2) instead of the Galaxy A53's 32MP (f/2.2) camera for selfies. And that's really the extent of the notable differences. Otherwise, you're still looking at a 5G phone with a 5,000 mAh battery, same two-day battery life claim, and same 25W fast charging support.
There's no mention of the Galaxy A33 being released in the US, though in the UK it will sell for £329 in the UK.