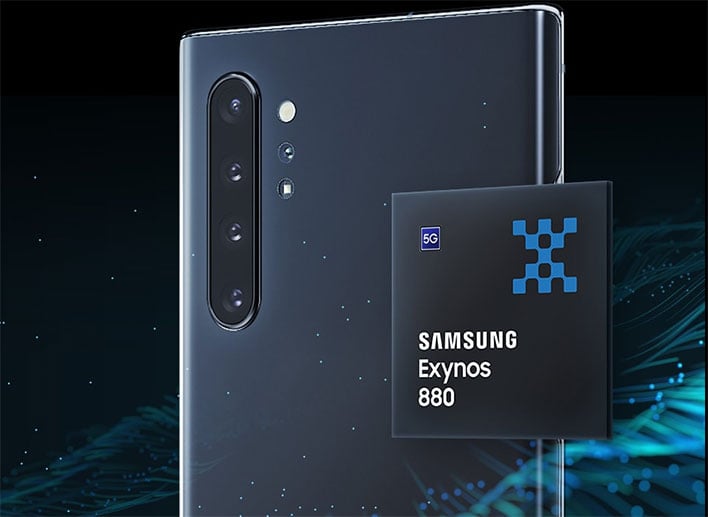 Samsung is fleshing out its family of home brewed processors with 5G connectivity, though its latest addition is not aimed at the flagship market. Instead, the new Exynos 880 has mid-range handsets in its sights. It is also similar in design the Exynos 980, though there are some key differences between the two SoCs.
The Exynos 880 is an octa-core processor. Two of the cores are high-powered Arm Cortex-A77 cores clocked at 2.0GHz, while the other six are Cortex-A55 cores clocked at 1.8GHz. It also features a Mali-G76 GPU and an integrated neural processing unit (NPU). If we stopped there, it would be easy to mistake this for a Exynos 980 at first glance, because the specifications are so similar.
They are not exactly the same, though. The pair of Cortex-A77 cores comprising the Exynos 980 are actually clocked a little higher, at 2.2GHz. While that should not matter for general purpose usage, the added pep could come in handy for more intense workloads and tasks.
Camera support is another key differentiator. Whereas the Exynos 980 supports a camera with up to 108 megapixels, the Exynos 880 tops out at 64 megapixels (both also support dual 20-megapixel + 20-megapixel configurations). That still allows for some stellar photography, depending on other factors (megapixel count is no the end-all, be all).
The Exynos 880 also supports displays up to 2520x1080 in resolution (Full HD+), and can record 4K Ultra HD video at 30 frames per second. Samsung's flagship Exynos 980 ups the ante a bit in both categories, with support for resolutions up to 3360x1440 (WQHD+)  and can record 4K Ultra HD video at up to 120 frames per second.

What's interesting is that even though this is technically a mid-range SoC, the specifications are not that far off Samsung's flagship chipset. So in addition to getting 5G connectivity into more devices, we could be looking at some compelling options that perform nearly as well as phones that command $1,000 and up, but at more affordable price points.
That caveat is availability. Here in the US, Samsung typically outfits its phones with Qualcomm's Snapdragon processors, whereas its Exynos chips are reserved for international models. That will likely be the case with the Exynos 880.