We were told in no uncertain terms that with the arrival of the Exynos 2200 with a GPU powered by AMD's RDNA 2 graphics architecture, "play time is over." And in a promotional video (see below), Samsung declared this would be the "chip to change the mobile gaming experience." Big words and big promises for sure, but apparently the Exynos 2200 is just a little faster in the areas that gamers and enthusiasts care about most.
This would explain why Samsung has been so coy with where the Exynos 2200 fits into its ecosystem. During the Galaxy S22 reveal, there was nary a mention of Samsung's home-brewed silicon. As Samsung has done in the past, its latest flagship phones will come in two variants—one built around Qualcomm hardware (Snapdragon 8 Gen 1) and another with its own silicon (Exynos 2200). Check out the hype video for the latter...


Prior to launch, we wondered if Samsung would roll solo with the Exynos 2200 for all models, given all the hype surrounding the chip's RDNA 2 graphics. But then a Twitter post promoting the chip's unveiling disappeared, and rumors surfaced that it was not hitting the desired clock speeds. It was also suggested that Samsung scrapped the Exynos 2200, though that wasn't true.

Samsung did end up announcing the Exynos 2200 with a GPU dubbed Xclipse 920, but it hasn't been the launch spectacle we anticipated. This despite being the first chip to arise from a partnership between Samsung and AMD. So what's the deal? 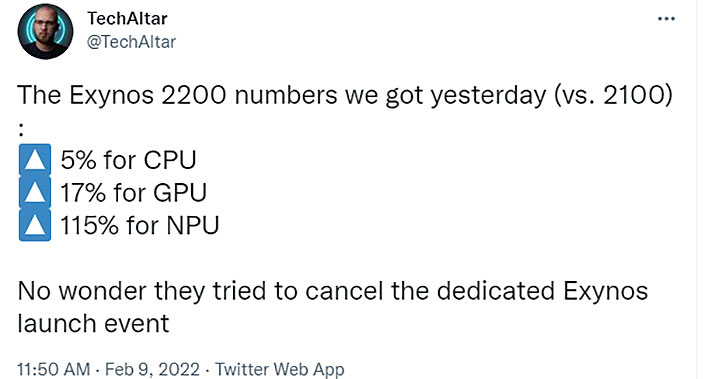