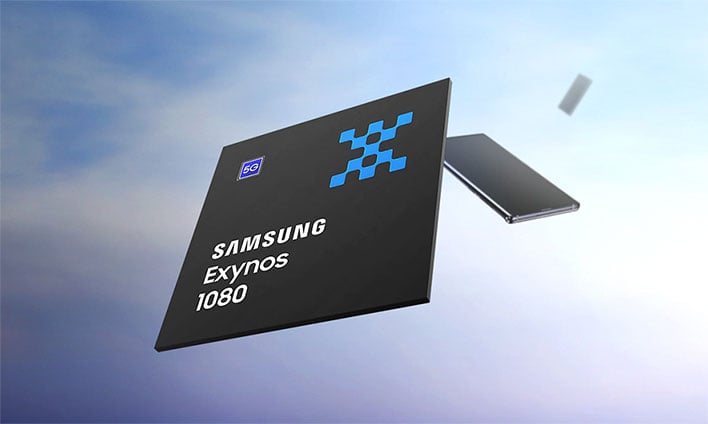 Samsung on Thursday officially the lifted the curtain to unveil a new mid-range mobile processor, the Exynos 1080. Billed as a "5G processor that will make your phone fly," the new chip combines 5G and artificial intelligence capabilities into a slice of silicon built on Samsung's 5-nanometer extreme ultraviolet (EUV) manufacturing process.
As the model name implies, the Exynos 1080 supplants the Exynos 980 (as found in the Galaxy A Quantum) in the mid-range category. But unlike the previous generation chip, which sports a 2+6 configuration (2x Cortex-A77 at 2.2GHz and 6x Cortex-A55 at 1.8GHz), the Exynos 1080 adopts a 1+3+4 CPU arrangement. Specifically, it wields a Cortex-A78 core clocked 2.8GHz, three more Cortex-A78 cores at a slightly slower 2.6GHz clockspeed, and four Cortex-A55 cores clocked at 2GHz.
So right off the bat, Samsung is embarking on a couple of firsts—its first 5nm Exynos chip and its first 1+3+4 CPU arrangement. Interesting stuff, and it should give the Exynos 1080 a bigger compute punch than the Eyxnos 980.

For graphics, the Exynos 1080 is infused with a Mali G78MP10 GPU, based on Arm's second-generation Valhall architecture. The hype is high on the chip's graphics capabilities, with Samsung claiming it takes "mobile gaming to a whole new level by bringing console-like gameplay to your mobile device." We'll have to wait and see how it pans out.
An integrated neural processing unit (NPU) handles AI chores. Combined with a digital signal processor (DSP), Samsung says the Exynos 1080 can run up to 5.7 trillion operations per second (TOPS), to power smart applications like virtual assistants, as well as augmented reality workloads.
Other features include support for LPDDR5 and LPDDR4x memory, UFS 3.1 storage, 4K encoding at 60 frames per second, single camera sensors up to 200 megapixels and dual 32-megapixel cameras, and WQHD+ displays at up to 90Hz and FHD+ displays up to 144Hz.
There is increased focus on 5G connectivity these days, and the Exynos 1080 supports both 5G NR Sub-6 frequencies with to 5.1Gbps of download performance, and mmWave downloads topping out at 3.67Gbps.
Samsung's new chip will initially find its way into a Vivo handset in early 2021.