Samsung is on the cusp of launching a new range of flagship phones, the Galaxy S22 series, and the upcoming handsets will feature a unique twist—materials made discarded fishing nets that otherwise would clutter the ocean. The effort is an extension of Samsung's Galaxy for the Planet initiative aimed at reducing the company's environmental footprint.
In a blog post, Samsung points out that a whopping 640,000 tons of fishing nets get abandoned and discarded each year. Whereas most people probably think of water bottles and grocery bags when the topic of ocean-bound plastic comes up, Samsung says discarded fishing nets represent a hidden threat, and can linger in the oceans for centuries. 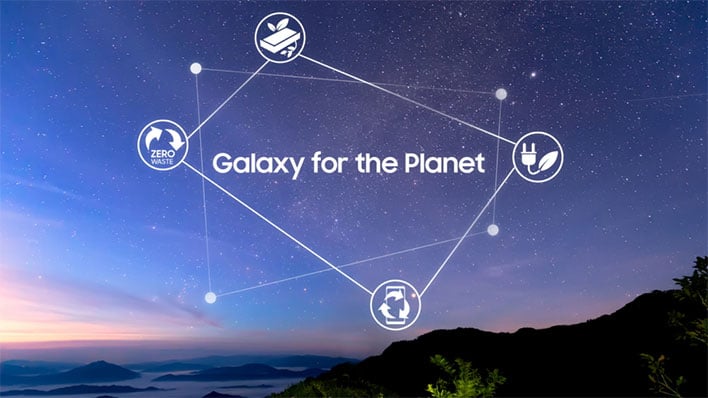 "These ‘ghost nets’ are responsible for trapping and entangling marine life, damaging coral reefs and natural habitats and even ending up in our food and water sources," Samsung says. "These discarded fishing nets are disrupting the delicate balance of our environment at an alarming rate. Collecting and repurposing these nets are vital first steps in keeping our oceans clean as well as preserving the planet and our collective future."
Samsung is set to roll out a new flagship Android phone line (presumably the Galaxy S22 series) at its Galaxy Unpacked event on February 9. Incorporating ocean-bound plastic throughout the series and its entire Galaxy product lineup is part of an overarching effort to eliminate single-use plastics and expand the use of other eco-conscious materials. That includes recycled post-consumer material (PCM) and recycled paper, Samsung says.
"With this transformation, the future of Galaxy technology will bring leading product design and deliver better environmental impact," Samsung adds.
It's not entirely clear how much of the "new material" incorporates discarded fishing nets and/or other ocean-bound plastics, or how much of the 640,000 tons of an annually abandoned nets it can reclaim. Whatever the case might be, it's nice to see Samsung go in this direction.