Samsung's big and bold Odyssey Ark gaming monitor is now available to buy, though it's ultra-premium pricing relegates this release to niche territory. As in, the MSRP is set at $3,499.99. Part of that is because of its immense size—this is a 55-inch monitor—but it also boasts a quantum matrix mini LED panel with an immersive curvature (1000R).

The upshot of mini LED technology is that by cramming more lights into the panel, the display can potentially beam much brighter visuals and do a better job at illuminating specific parts of a scene with less blooming (otherwise known as the halo effect). We haven't tested the Odyssey Ark, but we have spent hands-on time with an 85-inch Samsung Neo QLED TV with mini LED technology and it looks great.
Incidentally, the latest version of the aforementioned 85-inch TV actually costs less than this 55-inch monitor—the QN90B is on sale for $3,217.99 at Amazon. Last year's model (QN90A), the one we've seen in person, is even less at $2,877.99 on Amazon. Go figure.
Though the 55-inch Odyssey Ark encroaches on TV territory in terms of physical size, it's purpose-built for PC and console gaming. It pairs a 4K resolution with a respectable 165Hz refresh rate, 1ms response time, peak 1,000 nits brightness (600 nits typical, 420 nits minimum), 1,000,000:1 contrast ratio, and a curvature designed for sitting relatively close to the display. It also comes with an Ark Dial to manipulate the on-screen display (OSD) 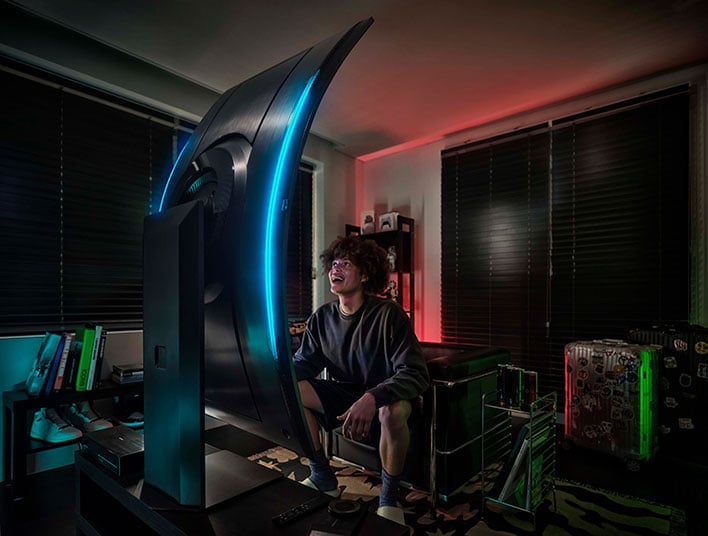 This is a FreeSync Premium monitor too, meaning variable refresh rate and HDR support are both part of the package. And if you really want to, you can rotate the display into portrait mode (or "Cockpit Mode," as Samsung calls it). You can also split the display into three screens in Cockpit Mode, or four screens when horizontal.
Whether any or all of this justifies the $3,499.99 pricing, you'll have to decide for yourself. If so, you can pick it up on Amazon. Alternatively, you can go almost as big (and ultra-wide) for far less—the 49-inch Odyssey Neo G9 with mini LED tech is $1,699.31 right now, while the non-mini LED version (Odyssey G9) is selling for $1,099.99.