Samsung is busting out all the tricks for its refreshed TV lineup for 2022. Sure, micro LED lighting and big screens topping 100 inches are present and accounted for, but those features are just the tip of the iceberg. How does a 144Hz refresh rate sound? And on top of that, Samsung has added a new "Samsung Gaming Hub" that gives direct access to NVIDIA's GeForce NOW and Google's Stadia cloud gaming services. Utomik is included too, and there could be more services on the say.

"The Samsung Gaming Hub will empower players to discover and jump into the games they love faster through game streaming services. Players will have access to an extensive library of games through Samsung’s partnerships with industry leaders—NVIDIA GeForce Now, Stadia and Utomik—and that’s just the beginning," Samsung explains.
The Gaming Hub will be included on "select" models, though it's not clear exactly which ones. And beyond the cloud gaming angle, the hub will also work with game consoles connected via HDMI, with controller pass-through so you can use the same controller. Samsung says it will support PlayStation and Xbox controllers right out of the gate.
This being Samsung, a major player in the TV space, there are a whole bunch of new models coming this year. It's launch a line called "Micro LED" with 25 million micrometer-sized LEDs squeezed in, for what Samsung says will create a heightened level of clarity and contrast. This lineup will debut in three sizes, all of them really big: 110 inches, 101 inches, and 89 inches.
It's next-gen Neo QLED sports an updated Neo Quantum chip, which itself introduces advanced contrast mapping with BLU (back-light unit) to increase the brightness level from a 12-bit to a 14-bit gradation. According to Samsung, this enables greater control of the mini LEDs—across 16,384 steps, quadrupled from 4,096 steps previously.
Once again, Samsung will be offering this series in both 8K and 4K resolutions. These are the first such sets to support a 144Hz refresh rate. That gives the TVs a bit of future-proofing (though nothing is truly future-proof). Other features include new Shape Adaptive Light technology to control the shape of light from the mini LEDs (to further enhance brightness, especially for HDR content), and an EyeComfort mode to automatically adjust brightness and tone based on a built-in light sensor and sunset/sunrise information. 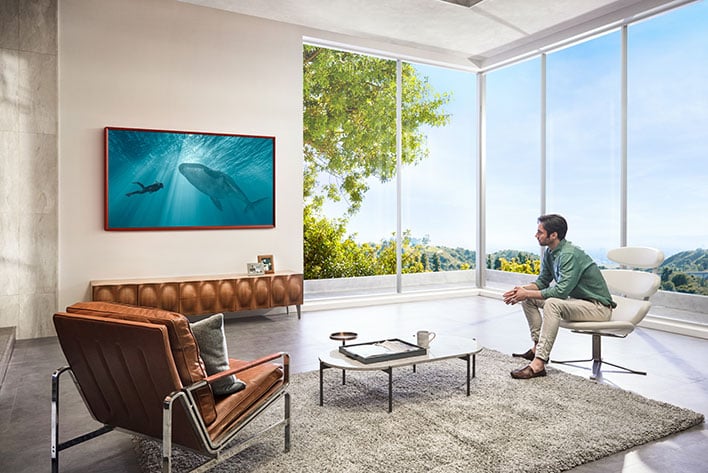 Samsung's rolling out lifestyle TVs too, including an updated The Frame in 32-85 inches. And because of course, you'll be able to shop for NFT artwork through Samsung's Micro LED, Neo QLED, and The Frame TVs. Yeah, we groaned too.
Pricing and availability have not yet been announced.