During 2020, the popularity of AMD processors in laptops has exploded thanks to the arrival of the Ryzen 4000 series. With excellent performance, relatively low power draw, and multi-core prowess, AMD has scored many design wins and is chipping away at Intel's firewall in the laptop sector.

However, given the proprietary nature of most laptop motherboards and how each OEM tweaks performance profiles and CPU clocks to suit their needs, it can be difficult to release a one-size-fits-all utility that can tweak these mobile processors. But the Ryzen Controller Team thinks that it has a solution with its new Ryzen Controller software. 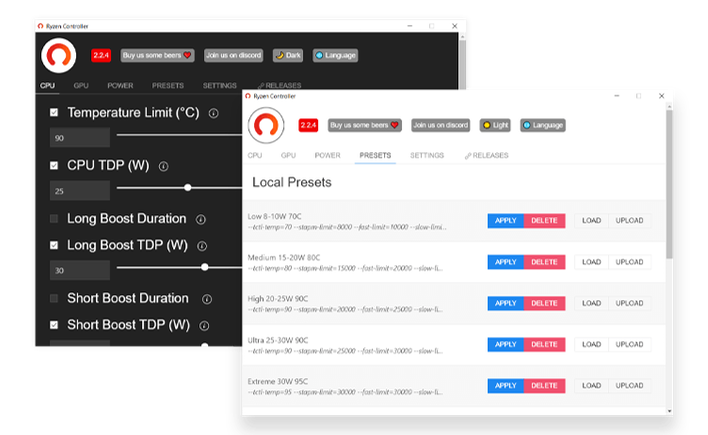 Ryzen Controller allows you to tweak settings that will alter your laptops STAPM, or Skin Temperature Aware Power Management. In other words, STAPM monitors and controls things like TDP and clock frequency so that your laptop is able to hit boost clocks for specified periods of time, then throttle back down to make sure that it doesn't cook itself (or your legs).

According to the developers, you'll be able to control both Short and Long Boost TDPs (which determines the TDP of the CPU in "boost"), temperature limits, and boost periods (among other settings). All of these settings are accessed through an uncluttered GUI that makes configuration simple. In addition, you can create custom presets for your individual needs (i.e. Work and Gaming profiles).

The Ryzen Controller software supports "most" Ryzen 2000, Ryzen 3000, and Ryzen 4000 laptops and is available for folks running Windows 10 or Linux (Debian/Redhat).

If you're willing to take the plunge with your AMD Ryzen-based laptop, you can download the Ryzen Controller from the following website. If you get it installed, report back in the comments section below on how it works out for you.