AMD's Ryzen 4000 family of Zen 2 processors have been very well-received in the laptop market with the company securing a number of key design wins, thanks to excellent overall performance and power efficiency. And while Ryzen 4000 graphics performance won't knock your socks off, the integrated AMD Radeon Vega GPU can also handle some light gaming workloads.

Needless to say, AMD's rise is coming at the expense of Intel, which has long dominated in the laptop sector. Intel has countered AMD's Ryzen 4000 family with its 11th generation Tiger Lake processors with integrated Iris Xe graphics, but even current quad-core CPU models aren't enough to tackle AMD's high-end Ryzen 4000U configurations that top out with 8-core/16-thread SKUs.

So, what's behind AMD's seemingly masterful execution of top-notch performance while maintaining enviably low power consumption on mobile platforms? Intel sought to answer this question as well and performed its own internal tests on five Ryzen 4000U Series notebooks and compared them against similar systems with its own Tiger Lake processors installed. 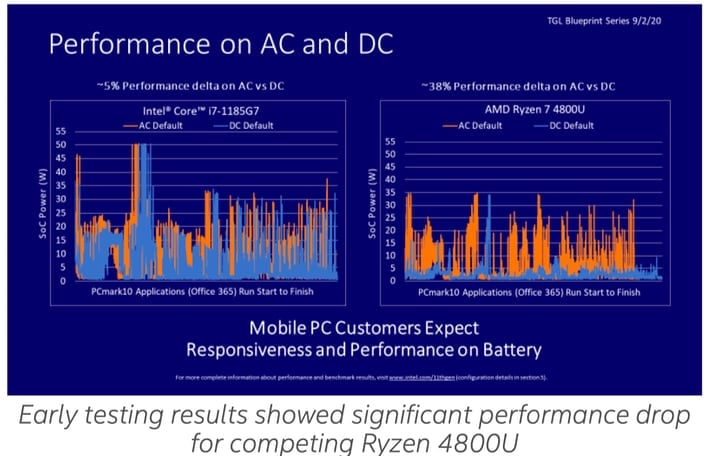 According to Intel's own internal testing -- and we have to be very clear, we're relying on Intel's numbers here -- AMD-based systems showed significant performance throttling when on battery power versus when plugged in. Across a wide spectrum of benchmarks, Intel observed much steeper drops in performance for the Ryzen 4000 systems compared to their Intel-based counterparts.

Among the AMD-equipped laptops tested were the: 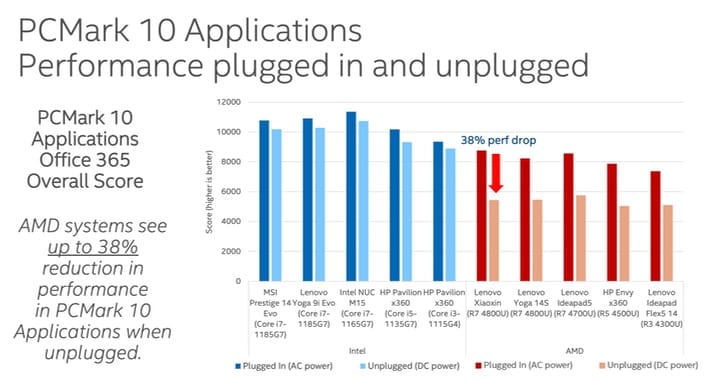 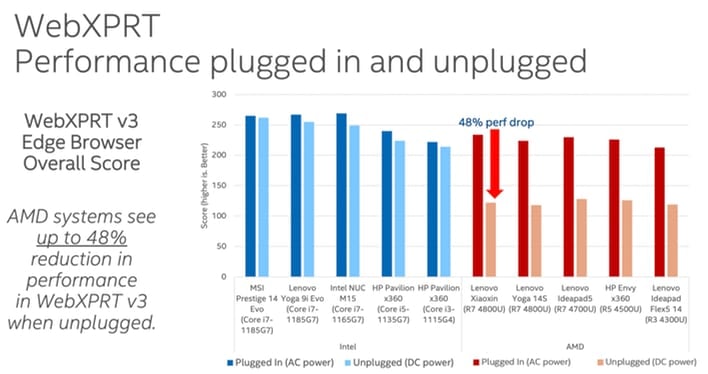 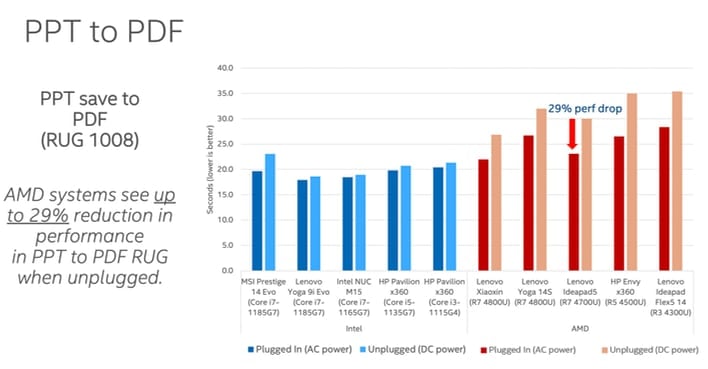 While Intel systems also throttled while on battery power versus being plugged in, they typically were typically slower by less than 10 percent. With the Ryzen 4000 systems, Intel saw performance drops of around 38 percent in PCMark 10 and by 48 percent in WebXPRT. Sysmark 25 saw up to a 30 percent decline in performance versus when plugged in, and PPT to PDF conversions resulted in the AMD systems running the test nearly 30 percent slower while on battery power. 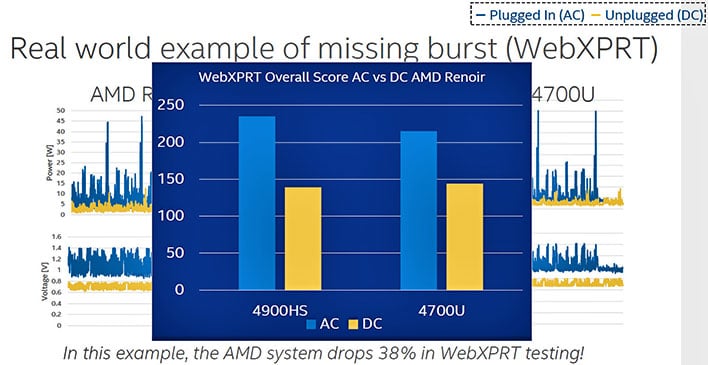 What we should point out here, however, is that power profiles that dictate system performance when plugged in or on battery power are not completely up to AMD. Each system OEM has the power to offer customized profiles to manage performance/power how they see fit, though AMD likely offers guidance of course. What's even more puzzling is that four out of the five systems that Intel selected were from Lenovo, while it used a mix of Lenovo, MSI, Intel, and HP systems for the Tiger Lake systems. If anything, this is likely more of a peculiarity with Lenovo's power profiles on Ryzen 4000 systems than anything that AMD is doing itself, and it may be that Lenovo simply has more AMD models out on the market currently.

We did a little in-house sanity spot check with an AMD Ryzen 7 4800U-powered Lenovo IdeaPad Slim 7 and indeed did see large performance deltas as well, when switching between AC and battery power. Here are a few of our results:

However, perhaps the most intriguing benchmark result – at least for Intel -- came from Cinebench R20, which has always been somewhat of a "sore" benchmark for Intel. Intel has typically balked at Cinebench results as the higher core count, multi-threaded performance of AMD CPUs has put its processors at an inherent disadvantage. However, the AMD systems showed very small drops in performance on battery power in the Cinebench R20 single-threaded benchmark, while the multi-threaded benchmarks showed little to no performance throttling at all on battery power. 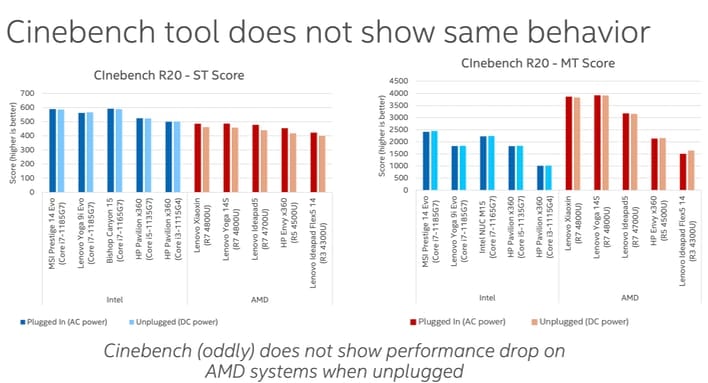 Intel seems to be hinting [very strongly] that AMD is trying to game the benchmarks in Cinebench. Intel writes, "Cinebench (oddly) does not show performance drop on AMD systems when unplugged."

Conversely, Intel only provided a handful of benchmarks in its presentation, and there are also likely other areas, (as with our WoW benchmark scores above), where there were no performance hiccups or very little regression for AMD processors.

Intel claims that AMD is trying to manage power and voltage levels by delaying system responsive and burst performance by 7 to 10 seconds, which in turn results in lower benchmark numbers. This in turn allegedly gives Intel the upper hand. AMD’s actions, according to Intel, help battery life, but result in seriously degraded performance on battery power. On the surface, this seems like a fair point to make in a device that will likely be used unplugged at least some of the time, if not a majority of the time. But again, this is likely a vendor-specific setting, and not one that AMD dictates. 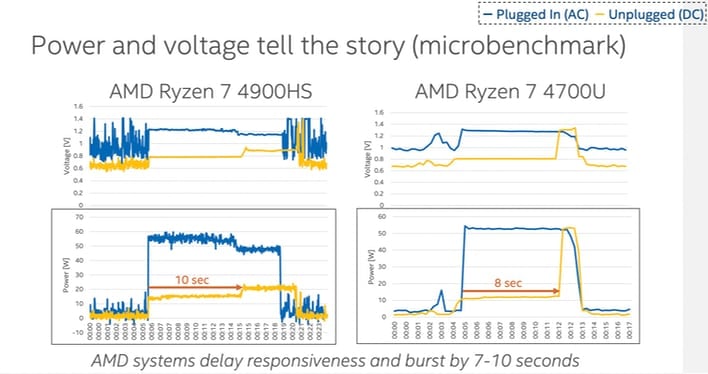 Intel concludes its finding by -- of course -- touting the performance of Tiger Lake systems, and rather tersely states that "AMD performance on battery negates value of its product stack". Intel also makes an excellent observation stating that "Notebook testing should be done in an unplugged state (or in both modes) to represent the experiences of end consumers."

We must reaffirm that these numbers (except for our spot checks on an AMD system) are all coming directly from Intel, and that it has a vested interest in showing its products in the best possible light. However, we can't argue with the fact that performance on battery should be just as important (if not more important) as when the system is plugged in.