When we tested the Ryzen 7 5800X3D, it came out ahead of the Core i9-12900K in every gaming benchmark. You've probably already heard that story, but you may not have considered the implications: Intel's Alder Lake CPUs are double-digit-percentages faster than AMD's original Zen 3-based Ryzen 5000-series processors, which means that the Ryzen 7 5800X3D is an enormous uplift from the chips without the extra cache.

We'd reckon that this is because it largely masks the Achilles heel of the chiplet-based Ryzen processors: their relatively high memory latency. Big caches mean you don't have to go out to main memory nearly as often, allowing the memory controller to more-efficiently mask access latency with batching and other methods.


There's no better demonstration of this than in the informal benchmark just published by CapFrameX. While we don't know what graphics card was used for the testing, it doesn't really matter—the point is that the Ryzen 7 5800X3D blows past the standard model even when you remove one of the DIMMs. 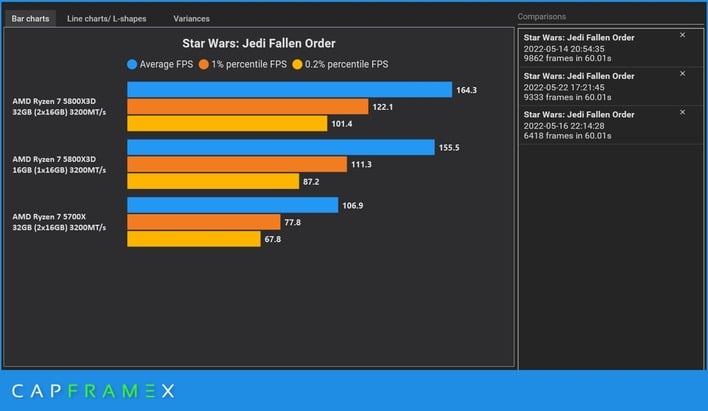 
In fact, the triple-cache model is so much faster, even its 1% low framerates are still higher than the Ryzen 7 5700X's average framerate, and that's with only a single memory channel populated. Predictably, performance with both modules installed is even better, although not by as much as you might expect. That's because the L3 cache is doing all the heavy lifting here, evinced by the radical performance gain.

CapFrameX makes much of the middling memory clock, referring to it as "potato RAM," but we have to note that memory running at 3200 MT/s brings the Infinity Fabric clock within 200 MHz of the AMD-specified maximum of 1800 MHz. Sure, overclocking can take it higher, but it can be difficult to get much past 1900 MHz without affecting stability.

Over at German site 3DCenter, they noted a few other tests that compared performance on the Ryzen 7 5800X3D with slower RAM versus faster RAM, and in general the uplift from using fast DDR4-3800 memory (compared to cheap DDR4-3200) was a single percentage point and change. That's good news for folks balking at the relatively high price of the stacked-cache-equipped chip, although we might spring the extra fistful of dollars for maximum performance anyway.