Much to the delight of fans of the Grand Theft Auto franchise, Rockstar Games earlier this month released Grand Theft Auto: The Trilogy - The Definitive Edition, a remastered collection of three of the most popular and iconic titles from the ongoing series. Unfortunately, it also debuted with a multitude of issues, prompting an apology by the developer. Good news though—the game's first update is now out and it purports to fixe dozens of bugs.
In case you missed it, the collection includes remastered versions of Grand Theft Auto III, Grand Theft Auto: Vice City, and Grand Theft Auto: San Andreas. Rockstar Games prettied up all three games with high resolution textures, increased draw distances, GTA V style controls, and other modern updates the freshen up and revive these older titles.
However, graphical glitches and performance issues plagued what had been a much-anticipated release. Or as the developer put it in an apology note, the collection suffered "unexpected technical issues."
"Firstly, we want to sincerely apologize to everyone who has encountered issues playing these games. The Grand Theft Auto series—and the games that make up this iconic trilogy — are as special to us as we know they are to fans around the world. The updated versions of these classic games did not launch in a state that meets our own standards of quality, or the standards our fans have come to expect," Rockstar Games said. 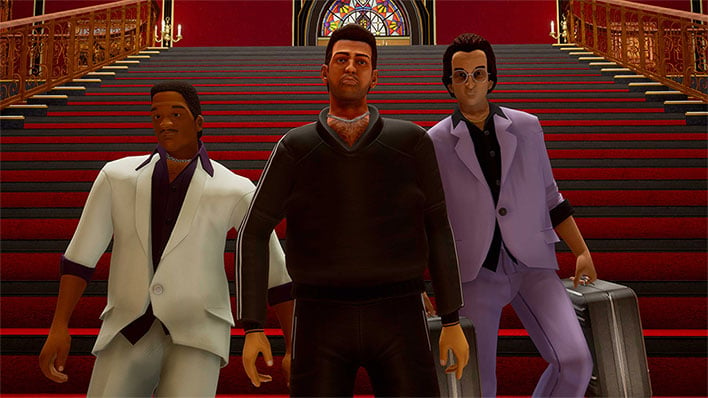 The developer says it has "ongoing plans to address the technical issues and to improve each game going forward." Rockstar Games did not get into specifics, but its first update for the collection brings with it a massive list of fixes spanning more than 60 issues, including ten that apply to each game. They include...
There are dozens of other issues this update aims to fix, the most of which apply to San Andreas. You can check out the patch notes for the full list.
On a related note, this update applies to PlayStation 5, PlayStation 4, Xbox Series X|S, and Xbox One owners. What about the PC version? Funny thing—Rockstar Games pulled the title offline for PC shortly after launch in order to "remove files unintentionally included" in these versions." Speculation is that it's because the PC release contained unlicensed music files, which were discovered in a data-mining effort.
Rockstar Games said it will be adding the PC version of the collection to its store sometime soon.

"Additionally, everyone who has purchased Grand Theft Auto: The Trilogy – The Definitive Edition for PC from the Rockstar Store through June 30, 2022, will receive these classic versions in their Rockstar Games Launcher library at no additional cost. We will update everyone as soon as these are back in the Rockstar Store," the developer added.