Razer is introducing a rather intriguing device for us today, and it's a nice departure from the steady stream of gaming PCs that the company typically releases. The company is looking to chop through the desktop gaming market with the Tomahawk modular gaming PC, which is based around Intel's NUC platform.

To be more exact, at the heart of the Tomahawk is the Intel NUC 9 Extreme Compute Element card. The Complete Element card contains the processor -- up to a Core i9-9980HK -- memory, and SSD on a single module. This module is then plugged right into the chassis, which makes serviceability and upgrades a quick and simple affair. In this case, the module features a 512GB PCIe 3.0 SSD and 16GB of DDR4-2667 memory (all upgradable). You also will find a 2TB HDD backing you up for storage duties, and an open M.2 PCIe 3.0 slot to add an additional SSD.

But perhaps the best thing about this compact PC gaming desktop is that it can accommodate truly full-size desktop graphics cards (up to 320mm x 140mm), including the beastly NVIDIA GeForce RTX 3080 (which is an optional upgrade from Razer). If you don't opt for the GeForce RTX 3080, you’ll have to settle for the integrated UHD 630 graphics.

When it comes to connectivity, it's pretty standard fare here with a couple of Thunderbolt 3 ports, four USB 3.2 ports, two GbE ports, and a single HDMI 2.0a port. Fueling the system is a 750W power supply and it weighs in at just 18.2 pounds (with the optional GeForce RTX 3080). 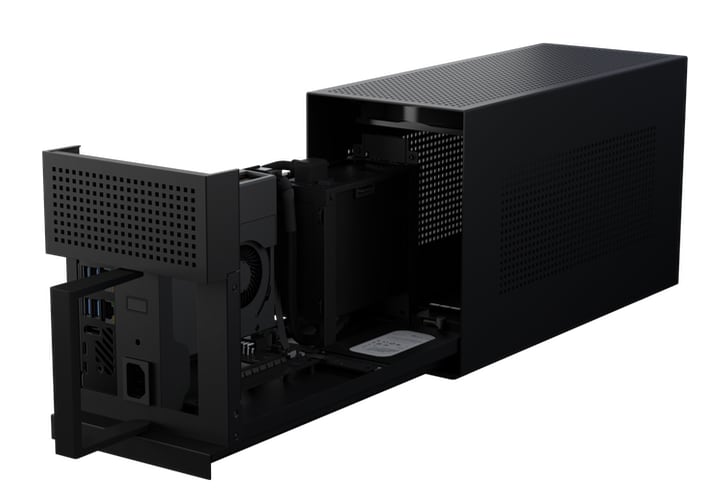 And of course, this wouldn't be a Razer PC without RGB lightning, which you'll find adorning the bottom of the chassis along the sides. The whole chassis looks like a sleek black monolith, which is only broken up but the green Razer logo up front.

When it comes to pricing, the barebones system without a discrete graphics card is priced at $2,399. However, if you want to add in the GeForce RTX 3080 (at least someone is able to get a reasonable supply of the cards), you'll have to pony up $3,199. The systems will be available to order exclusively from Razer.com later this month.