It looks as though relief for enthusiasts isn't coming anytime soon if you want one of NVIDIA's highly rated GeForce RTX 30 Series graphics cards. NVIDIA has cited overwhelming demand as it struggles to not only deliver its own Founders Edition cards to customers, but also GPUs that find their way into custom boards from its various board partners.

NVIDA CEO Jensen Huang previous stated that he expected supply issues to last through at least the end of 2020. However, on this week's earnings call, NVIDIA CFO Colette Kress explained that eager customers will be waiting into 2021 for relief. "While we had anticipated strong demand, it exceeded even our bullish expectation," said Kress. "Given industry-wide capacity constraints and long cycle times, it may take a few more months for product availability to catch up with demand."

Part of this extended window of torture for gamers looking to snag an Ampere card can be blamed on demand, but we can also attribute some of it to NVIDIA's choice of fab partner. NVIDIA decided to go with Samsung's 8nm process node for Ampere, which could be handicapping the ability to ramp production to acceptable levels. In a perfect world, NVIDIA would have been able to go with TSMC's 7nm or 5nm process nodes, but it is already at capacity with big name customers like AMD (Zen/Radeon), Apple (A4 Bionic/M1), and Qualcomm (Snapdragon 865/875). 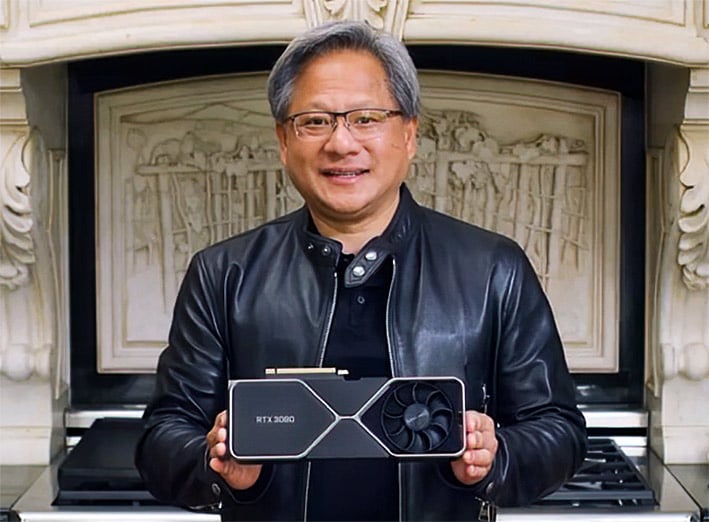 Huang is understandably ecstatic about the performance of Ampere, but acknowledges the demand has been an issue:

We’ve also expected a very, very successful launch with Ampere. And even with our bullish demand expectation and all of the Amperes that we built, which is one of the fastest ramps ever, the demand is still overwhelming.

And so, we’re going to continue to ramp fast. And this is going to be one of our most successful ramps ever. And it gives our installed base of some 200-million-plus GeForce gamers the best reason to upgrade in over a decade. And so, this is going to be a very large generation for us is my guess.

NVIDIA is not alone though with its problems addressing high customer demand. Even AMD has seen sellouts for its Ryzen 5000 family of processors, which launched earlier this month. And the company's Radeon RX 6800 and Radeon RX 6800 XT -- which compete directly with the GeForce RTX 3070 and GeForce RTX 3080 -- were also immediately snatched up by customers when they went on sale on Wednesday. Needless to say, enthusiasts are in for a long couple of months if they're looking to upgrade their rigs to the latest and greatest gaming tech.