For a lot of users finding a Raspberry Pi is almost impossible. Even if you do find one they're oddly expensive for the "credit card-sized computer" that had a first version released at $35. This has mostly been thanks to the significant chip shortages that have been plaguing almost all aspects of the computing industry over the last few years.


Despite the chip shortage, since January of 2021, Raspberry Pi's RP2040 chip has managed to help out both hobbyists and industries alike by providing a low-cost board for their needs. Still, one downside to the Pico boards is the lack of built-in Wi-Fi as well as a few other features. But to quote Professor Farnsworth from Futurama there is "good news everyone!" On June 30th, 2022 the Raspberry Pi team announced three new devices in the Pico lineup.

Most notably of the three new Raspberry Pi Pico products is the Pi Pico W, which adds 802.11n support onto the board without the need of expansion. The W is otherwise identical to its predecessor. The now included Wi-Fi chip is Infineon's CYW43439, which, while it does support Bluetooth, this is not enabled on the Pico W yet. This is likely to continue to reduce the overall power draw of the device. Additionally it does have radio shielding to help with wireless compliance. The Pico W is starting at $6.

The second in the three new Pico boards is the Raspberry Pi Pico H. At $5, this board does not include the wireless module. However it does add new pre-populated headers and a 3-pin debugging header. Definitely useful for simple control boards that need extra headers.

Are you noticing a naming convention here? W for wireless, H for headers. So then, it should be pretty clear what the third board is, the Raspberry Pi Pico WH—it combines both feature sets into one board, that will retail at $7. The H and W individually are officially launched as of now, though we don't have any links to retailers for them just yet, the WH is slated for release in August. 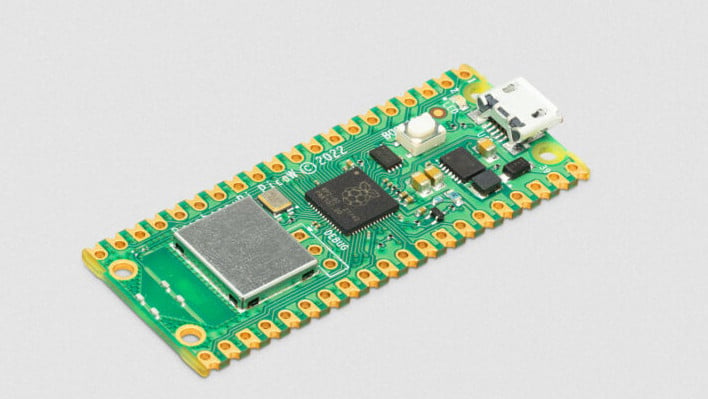 
In addition to updating and providing new hardware for the three new models, Pico SDKs have also been updated for the new header support and wireless networking support. The MicroPython libraries are also going to get an update. However, because of the nature of the boards MicroPython will have individual builds on a per-board basis, whereas if you use C you will be able to use it on any of the boards. The full announcement from Raspberry Pi can be read here.