A few days ago a Google AI Ethics Researcher was put on leave after claiming that the company's LaMDA AI language model, used for developing chat bots, may be sentient. Not long after that story hit, we started seeing people contemplating a potential AI or robot uprising. As unlikely as that may be, we've all seen the Terminator films. But we digress.

Alongside the recent LaMDA news, we've seen a few fun and interesting micro-device projects appear, that loosely use some form of AI or AI-like technology. Like this cool project that the Redditor, parisiancyclist, calls a "classic ball on a plate", for example. After seeing this little device in action, it seems to be just what our impending robot overlords need to toss us around or better maintain their balance when the inevitable fighting starts.


The project takes advantage of a Raspberry Pi, three servos, a camera, and a platform. When asked why three servos were used, the creator says that "three makes it a stable base," but six would be ideal, creating what is known as a Steward Platform.

While AI was referenced at the start of this article, this project is not a representation of true artificial intelligence. It is purely a logical implementation using machine vision that attempts to solve a physical problem. The project uses an Open Source Computer Vision Library known as OpenCV. The idea is that the Raspberry Pi detects the primary item of focus, in this case a ball, and it modifies the servo actuations to maintain the position of the ball on the platform. 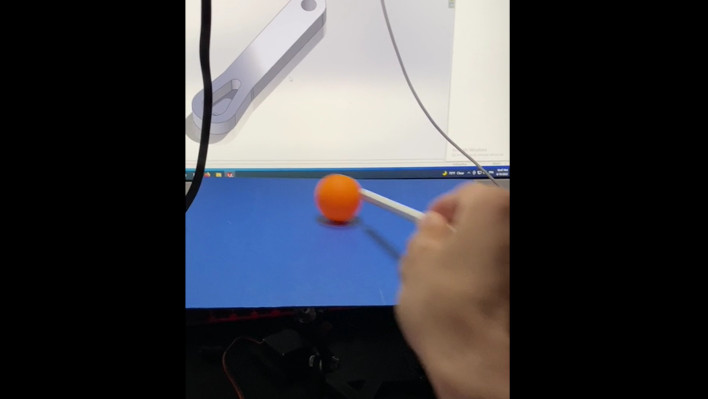 Using a stick to push the ball


What is the practical application of a ball on a plate? Well, similar devices already exist are are often used in manufacturing and packaging facilities to ensure items safely travel down the line. Similar devices are also used in flight simulators or even in rides at amusement parks. We don't typically see them in homes, but with open source software and increasingly less expensive components like the Raspberry Pi, home theaters with force-feedback seating and other interesting applications are possible.