Do you ever go wandering through a thrift store or even your grandparents' basement and find some awesome looking classic piece of electronics? Or do you just love that 1930s through 1970s wood-grain look? The only problem is that it's hard to find new parts to restore, or to fix these antiques up. Thanks to the Raspberry Pi and other micro-computers (and the modding scene) this is becoming less of an issue.

Redditor u/hosmtony has decided to share with the world how they have managed to restore a 1947-1948 Philco radio, and even turn it into a sort-of jukebox. All through using some great open source software, a Raspberry Pi, new speakers with crossovers, an external hard drive, a screen, and some woodworking knowledge.

Using the software known as Fruitbox, which allows for visual skins, the Redditor was able to make it look and even function similar to a real world jukebox. While this is the right era for the Fonz, he wouldn't need to give it a whack to make it work (it's the wrong model anyway). Still, this restoration is absolutely gorgeous. Obviously the first step with any project like this is to gut the original hardware.


After the gutting comes the wood restoration for this user, which the end result makes a world of difference. Some users like the beat up look, but we appreciate the effort and applaud the results. Next of course is starting to put in your own hardware. The nice thing about a classic home theater device like this is that it is bulky. That may be bad for weight, but that's great for working within. Using a couple of crossovers from and new speakers from Dayton Audio, a display with a Raspberry Pi mount from Sun founder, and custom wood mounting, u/hosmtony has put forth this great device.

If you want to try to build your own the creator did not specify exactly what parts were used. However,  from our eyes it looks like you can use the following, assuming you have your own Philco to break down... 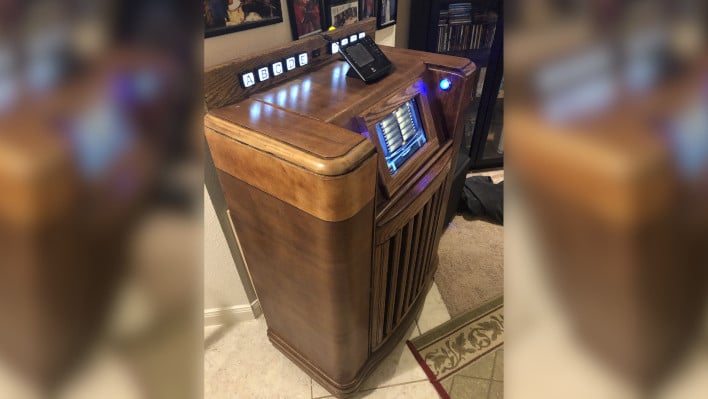 Fully Restored Philco Stereo
Of course you will need the software used, so you can grab Fruitbox V2 from GitHub. Also the creator shared the YouTube video they followed to make sure they had the skin they wanted for Fruitbox working how they wanted. Be aware that they used an external hard drive with their own music loaded. Lastly, they have two galleries in which you can view the photos they made of the progress those can be viewed here and here.