In contrast, the Raspberry Pi 4 has been around for 16 months. The Raspberry Pi Compute Module 4 is based on the same 64-bit Broadcom BCM2711 quad-core Cortex-A72 application processor running at 1.5GHz as found on the Raspberry Pi Model B. Here is a rundown of the key specifications...
There is one notable change to the latest Compute Module, and that is a shift away from SO-DIMM connectors to a pair of mezzanine connectors.
"Where previous modules adopted the JEDEC DDR2 SO-DIMM mechanical standard, with I/O signals on an edge connector, we now bring I/O signals to two high-density perpendicular connectors (one for power and low-speed interfaces, and one for high-speed interfaces)," the Raspberry Pi Foundation explains. 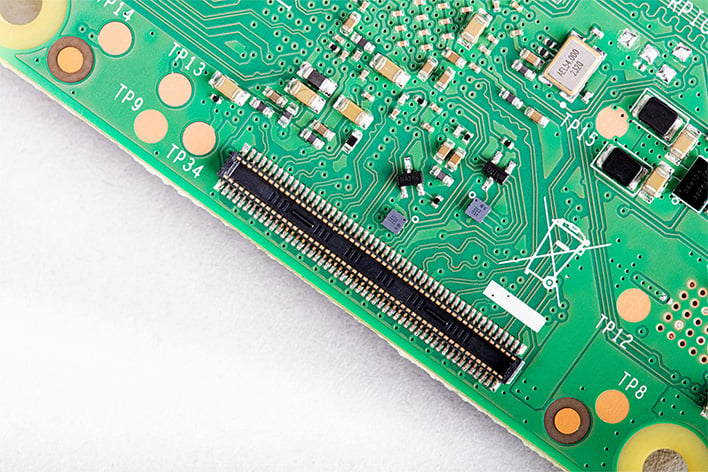 Some people will inevitably unhappy with this decision, but the change allowed the Raspberry Pi Foundation to "significantly" reduce the Compute Module 4's footprint (40mm x 55mm, or 1.57 x 2.16 inches), compared to past versions. This in turn means it can lend itself to smaller form factors for whatever DIY project you might be cooking up.
Buyers can select from a range of 32 different versions, depending on whether they want wireless connectivity, how much RAM (1GB, 2GB, 4GB, or 8GB), and how much onboard storage (none, 8GB, 16GB, or 32GB). The least expensive of these costs $25 and comes with 1GB of RAM, no wireless connectivity, and no storage.
Pricing goes up from there, obviously, on up to $90 for a wireless version with 8GB of RAM and 32GB of storage. Several options are available at different price points, however, like the following variants for $30: no wireless + 1GB RAM + 8GB storage / wireless + 1GB RAM + no storage / no wireless + 2GB RAM + no storage. 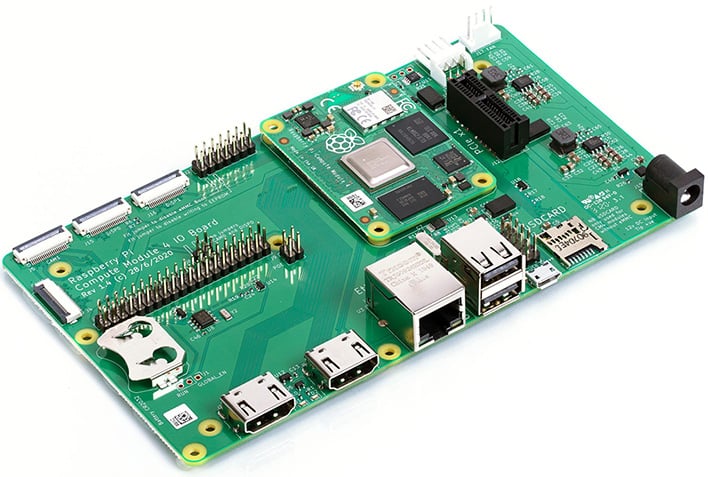 Also announced is an updated I/O board for the latest Compute Module. It offers up a pair of full-size HDMI ports, a Gigabit Ethernet jack, two USB 2.0 ports, a microSD card socket (only for use it the Lite variants), a PCI Express Gen 2 x1 socket, HAT footprint with 40-pin GPIO connector and POE header, 12v input via barrel jack (supports up to 25v if PCIe is unused), camera and display FPC connectors, and a real-time clock with battery backup.