The Shack is back on Twitter promoting its crypto and NFTs in an NFSW kind of way, and reactions are mixed. The 100-year old tech retailer decided to reimagine itself, following decades of decline, bankruptcy and being delisted by New York Stock Exchange in 2015.

It isn't unusual to find companies on social media flirting with the boundaries of what used to be considered "professional" these days. The hope is that they can garner the attention and business of the younger generation, sometimes at the risk of losing some of its older customers. Recently RadioShack made a comeback of sorts on Twitter, as the company reintroduced itself to the world in what some consider a very not safe for work (NSFW) manner.

The once upon a time electronics store found itself floundering for quite some time. In an attempt at rejuvenating its profits and profile, the Shack decided to become an online cryptocurrency company which also happens to also sell batteries.

"It's our voice, a new voice, one for the people," remarked Abel Czupor, the chief marketing officer for RadioShack. "RadioShack's audience used to be only an older demographic, but as times have changed and e-commerce has taken over, the old voice of RadioShack is no longer relevant."

That new tune being sung may be getting the eyes and attention of a younger generation, but some are warning that the "edgelord wacky" behavior could simply be "an ad campaign to court public favor for their crypto scheme," as noted by RJ Palmer recently on Twitter. 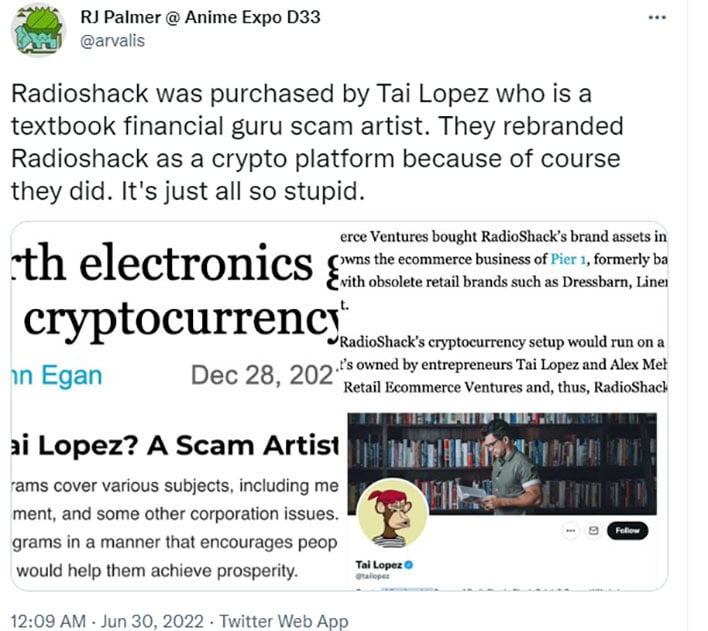 
The company found itself filing for bankruptcy twice following its decline, before finally being purchased by private equity firm Retail Ecommerce Ventures (REV) in 2020. The firm snatched up several other fledgling companies around the same time with the intention of breathing life back into them as online-focused stores.

In terms of revitalizing the RadioShack brand, REV launched RadioShack Swap, a decentralized crypto exchange platform which allows users to swap coins or tokens. This type of format allows users more flexibility and lower transaction fees than actual trading. As of right now, RadioShack's token, $RADIO, is worth about a penny.

When it comes to its latest marketing strategy on Twitter, and the opinions of some that it is nothing more than a crypto scheme, the company stated to MSN in an email, "Those criticisms are completely false. Sales have actually grown since we started upping our Twitter game over the past several weeks."

It is a definite gamble for the company to create a new persona that will appeal to a younger generation, while ostracizing many of its older customers. But as Kylie Cammon, founder of social media marketing consultancy Flying Hare Social, points out, "Everybody who's interested in crypto is interested in this kind of humor." She added, "They've definitely gotten what they were looking for there."