The Radeon RX 6900 XT is not quite the GeForce RTX 3090 killer that AMD maybe hoped it would be, though it is an incredibly fast graphics card that, in normal times, offers a relative 'value' compared to NVIDIA's finest (key word there being relative). Could AMD be working on a faster solution based on its RDNA 2 architecture? Like a Radeon RX 6900 XTX, perhaps?
Probably not, but the question is a valid one, with a leaked slide referencing the unreleased and unannounced part making the rounds. It popped up on Twitter, with the leaker (@CyberPunkCat) claiming the card "would be faster than 3090." That's a bold claim even if the card is bound for release, of which we are skeptical. 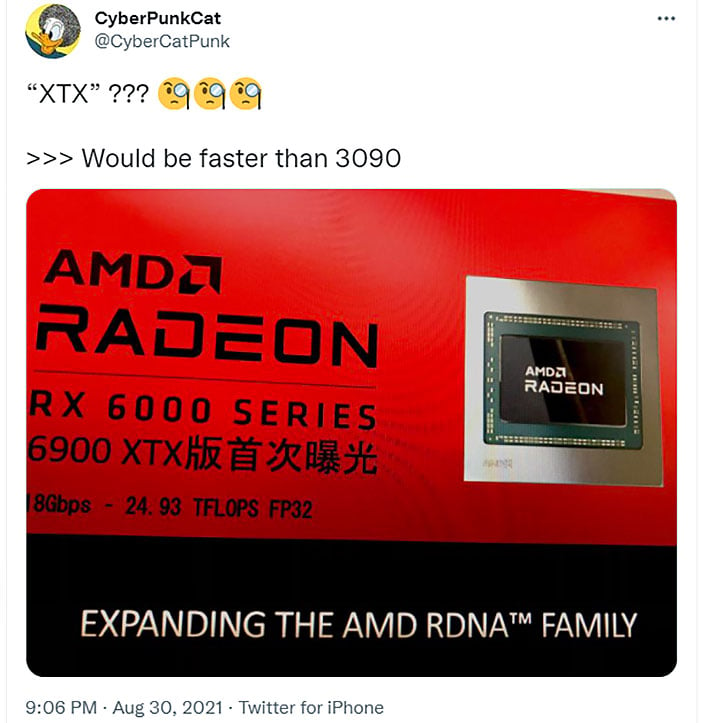 According to the slide, the upgraded card gets a bump to 18Gbps GDDR6 memory, compared to 16Gbps on the standard Radeon RX 6900 XT. It also points to 24.93 TFLOPs of single-precision compute performance being on tap for gamers and creators. But here's the thing—AMD's already given its add-in board (AIB) partners faster designs they can incorporate into their own models.

Following the launch of the Radeon RX 6900 XT, AMD later made available a binned Navi 21 XTXH graphics chip for ultra-enthusiast models, like the PowerColor Red Devil Ultimate Radeon RX 6900 XT we reviewed. These top-tier cards are capable of faster clock speeds, and better performance than the standard Radeon RX 6900 XT.
Additionally, AMD has already employed 18Gbps on memory on its LCS (liquid cooing system) design, which is yet another option for its hardware partners. Given what already exists, it would be puzzling for AMD to introduce a Radeon RX 6900 XTX with the same specifications as the LCS variant. So perhaps there are other upgrades in tow. Or, more likely, this is an old slide (if it is real in the first place).

More prominent leakers have not reported on any such card coming into existence. One of those leakers, Greymon55, went a step further and said not only have they "never heard of this thing," but questioned "what's the point" when there's already a Radeon RX 6900 XT LCS. We tend to agree, though anything is possible, right?
It certainly would be interesting if AMD tweaked its flagship another time. And with NVIDIA supposedly prepping a GeForce RTX 3090 Super built around a full-fat GA102 GPU with 10,752 CUDA cores, it could even make sense. But, we'll see.