Reference models of AMD's Radeon RX 6000 series will not be produced forever, with manufacturing coming to an end perhaps sooner than you think. Officially, AMD will stop making reference Radeon RX 6000 cards early next year, as AMD's Scott Herkelman stated on Twitter. Unofficially, production may have already come to an end.
This does not mean you will not be able to buy a Radeon RX 6900 XT, 6800 XT, or 6800 in the coming months or throughout next year, and probably the year after the that. It is just that reference designs sporting AMD's own three-fan cooling solution will be harder to come by, because the company is only planning to make them for a short time.
In their place, the focus will shift solely onto AMD's add-in board (AIB) partners, which will continue to crank out custom cooled designs for the life of the Radeon RX 6000 series. Custom cards are what many gamers gravitate towards anyway, because cooling, noise, and arguably aesthetics tend to be better. That said, this will inevitably disappoint some people.
So, when will production of reference parts actually end? When a Twitter user asked Herkelman in mid-November if AMD was still making reference cards for its latest GPU series, he responded affirmatively. 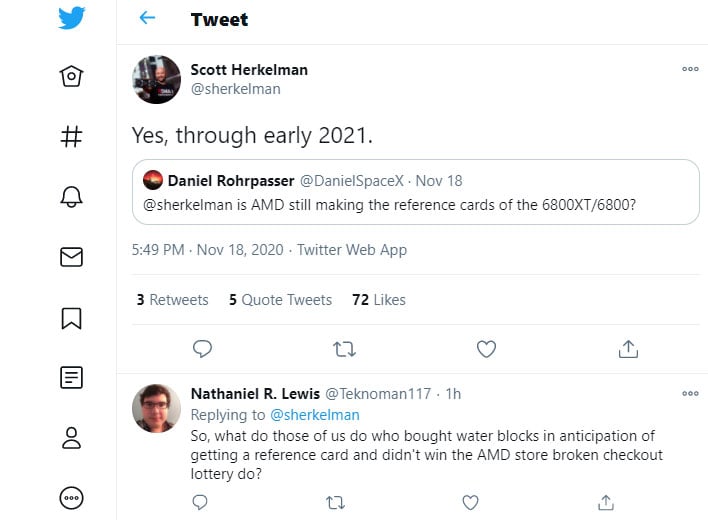 "Yes, through early 2021," Herkelman said.
Herkelman should know, given that he is the vice president and general manager of AMD's graphics business unit. That said, his reply drummed up some angst, with one person noting they bought a water block specifically built for a reference Radeon RX 6000 series card in anticipation of being able to use it at some point, but is worried the limited availability will render his cooler useless.
Unfortunately for him and others in his situation, AMD might have ended production early. So says Cowcotland, which claims that at least for the Radeon RX 6900 XT, the reference model is already at its end of life, despite having just launched (check out our Radeon RX 6900 XT review). A Google translation of site quotes it as saying the reference Radeon RX 6900 XT is about to be a "real collector['s]" item.
Some things are getting lost in translation, though. The card is not actually at its end of life stage, because that would indicate AMD has moved on from supporting the product, and obviously that is not the case. But could production have ended already? It's possible. The site also appears to claim the same is true of the Radeon RX 6800 XT and Radeon RX 6800.
Even if true, however, there could be pallets of cards waiting to go out, on a staggered basis. So if you did not manage to snag a reference card, there is still a chance you could, even if the rumor is true.