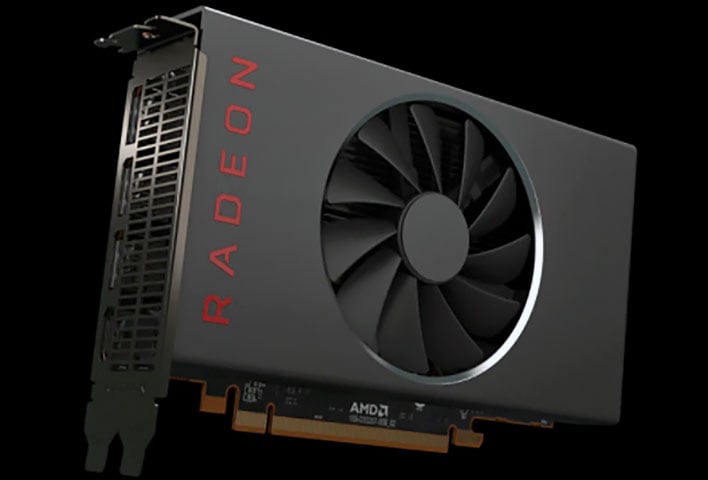 AMD's Navi family of graphics cards falls into a pretty tight price range currently, from the $170 Radeon RX 5500 XT 4 GB to the $400 Radeon RX 5700 XT, where AMD's Navi-based GPU ambitions max out (for now). Anything priced lower than that relied on the older cut down GCN Radeon RX 500 parts. While NVIDIA counts down to an expected Ampere launch on September 1 and we know that AMD's own Big Navi isn't in the too-distant future (with real-time ray tracing features in tow), the red team did announce a new GPU: the Radeon RX 5300.

If that number sounds familiar, it's because a variant of this GPU has been shipping in Apple's 16" MacBook Pro for months now. This, however, marks the first time Navi has stretched down towards bargain bin status as a desktop graphics card. Apple's Radeon Pro 5300m, the desktop RX 5300 and even the desktop Radeon RX 5500 XT all share the same GPU, however—Navi 14. That means this card should be somewhat familiar. 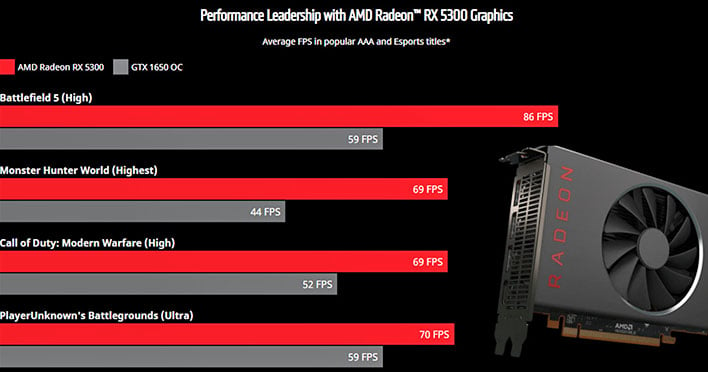 The bigger difference with the AMD Radeon RX 5300 is in its memory configurattion. It still uses the same GDDR6 of its larger sibling, but the path has been trimmed from 128 bits to 96 bits. That means that with 14 Gbps GDDR6, AMD gave the Radeon RX 5300 168 GB/s of bandwidth compared to the RX 5500 XT's 224 GB/s. At lower resolution and other scenarios where memory bandwidth performance is secondary, the two cards should rate 10-15% of each other, but we expect the bandwidth limitations will severely handicap the Radeon RX 5300 at higher resolutions. Also contributing to that disadvantage is that the RX 5300 officially tops out at just 3 GB of onboard VRAM.

With its 100 Watt board power, we expect that cards based on the Radeon RX 5300 will still have a 6-pin PCI Express connector. While pricing hasn't been announced, we feel that this card will probably slot in at around $130, thanks to the cut in memory bandwidth and capacity. Look for it at retail soon, hopefully.