When Qualcomm unveiled its Snapdragon X70 5G modem-RF system earlier this year, it was never destined to be a static release that wouldn't improve over time. Just as graphics cards and computer processors are prone to getting new features and capabilities, so it goes with the Snapdragon X70, an upgradeable architecture that just learned some new tricks. In addition, and perhaps even more exciting, Qualcomm has demonstrated the world's first 5G standalone mmWave connection, with peak speeds topping 8Gbps. More on that in a moment. 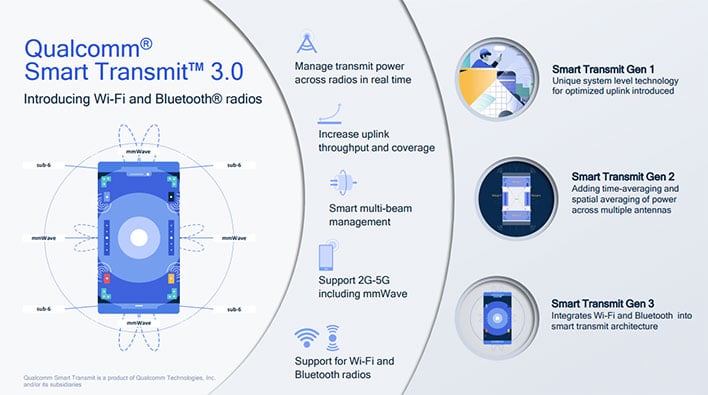 Smart Transmit takes advantage of modem-to-antenna system awareness to bolster upload data speeds and enhance coverage. The previous version did this exclusively for mmWave and Sub-6GHz bands to deliver a better 5G experience, while the new version adds Wi-Fi and Bluetooth radios to the mix.
Qualcomm 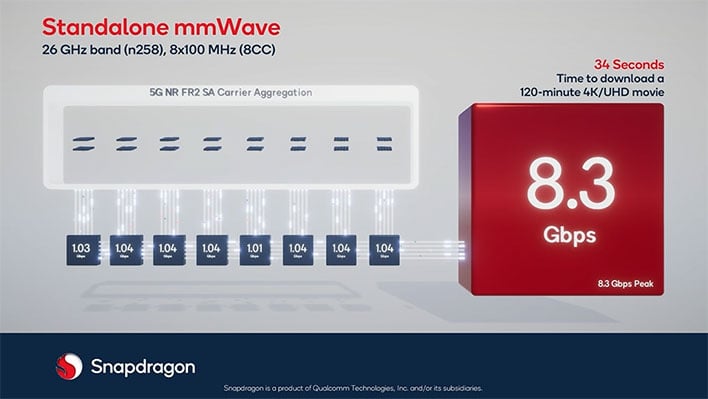 To put that kind of speed into perspective, it would take just 34 seconds to download a 2-hour movie recorded in 4K Ultra High Definition. But the speed capabilities are only part of the story. The key thing to note here is the standalone part, which is going to be a boon for residential wireless fiber broadband where 5G connects to the customer. Same goes for the enterprise.
"5G standalone mmWave allows for the deployment of 5G mmWave networks and devices without using an anchor on sub-6 GHz spectrum. This gives operators more flexibility to deliver wireless fiber broadband access with multi-Gigabit speeds and ultralow latency to residential and commercial customers," Qualcomm explains.
This is important because it paves a viable path for fiber networks to reach places they never would otherwise, enabling multi-gigabit speeds. Fiber roll outs are expensive, which is why they're normally reserved for densely popular areas (big cities and the such).
Wireless fiber broadband may sound like an oxymoron, but what it entails is using existing fiber networks for the backhaul network communication to the central office (CO). From there, it's been an issue getting fiber extended to the so-called last mile and servicing homes with the delightfully high broadband speeds that fiber delivers. And that's precisely where 5G standalone mmWave swoops in the save the day. 5G standalone wireless access points and base stations takes that fiber broadband backhaul that's frustratingly out of reach and extends into neighborhoods and areas that would otherwise miss out. 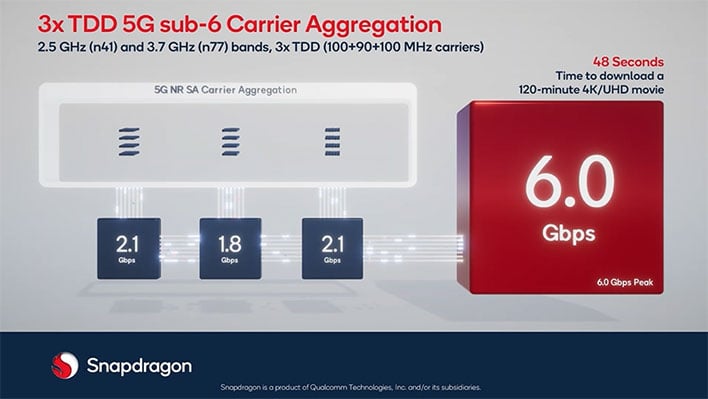 Qualcomm also demonstrated a few other Snapdragon X70 capabilities, including AI-enhanced 5G performance and 5G sub-6GHz carrier aggregation across three TDD channels.
As outlined in the slide above, 3x TDD 5G sub-6GHz carrier aggregation achieves peak download throughput of 6Gbps. Taking that same 120-minute 4K Ultra HD movie mentioned earlier, it would only take 48 seconds to download it to a device in its entirety.
The real upshot here, though, is that 5G carrier aggregation effectively boosts average speeds and facilitates more robust connections in challenging conditions, such as being on the edge of cell coverage far from the cellular base stations.
All good stuff from Qualcomm here. As to when this will trickle into the consumer space, Qualcomm says its Snapdragon X70 modem is currently sampling to customers and expects mobile devices to launch by the end of the year.